‘Great oysters and a good time’ 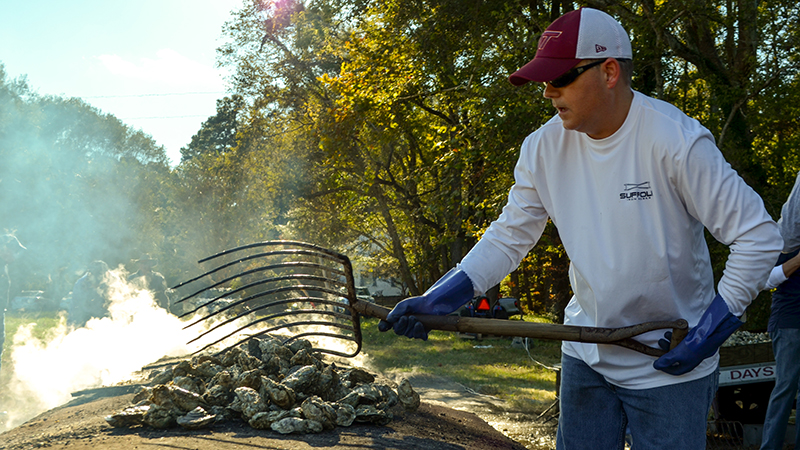 More than 220 hungry visitors enjoyed a sunny afternoon on Wednesday at the bank of Lake Burnt Mills in Chuckatuck. The breeze was cool, the sun was falling low and the air was filled with the enticing smells of another delicious roast.

“Finally, we get a fall day,” said Sarah Wagner, standing beside a table with her husband, Kyle Wagner, and their 3-year-old son, Dakota, ready and waiting for oysters.

The North Suffolk Rotary Club’s annual oyster roast at Pretlow Farm is a fundraiser filled with friends, festivities and crowd-pleasing nourishment. Patrons chatted away with draft beer and wine in hand, as the band played favorites like Johnny Cash’s “Ring of Fire” and volunteers worked on the main course.

“We have all the components for a beautiful afternoon of oysters, fun, friends and fellowship,” said Paul Venable, North Suffolk Rotarian and oyster roast chair.

That first ingredient came from Murray L. Nixon Fishery, of Edenton, N.C. The truck brought approximately 65 bushels of fresh oysters for roasting, according to Venable, and volunteers worked to prepare them for the concrete and steel grill.

Fires steamed the oysters as they cooked on the grill top covered in wet burlap bags until they popped open. Billows of smoke erupted outward as Rotarians pushed roasted oysters into wheelbarrows, then repeated the process for the next batch.

“You don’t want to get to close to the fire,” North Suffolk Rotarian Michael Council said with a laugh after a sprint of oyster shoveling. “We’ve got a good wind blowing (the smoke) away, so that’s good.”

Volunteers delivered freshly cooked seafood right to ticketholders’ tables by the wheelbarrow-full. Patrons pried open shells and enjoyed the meat with crackers, cocktail sauce, horseradish and whatever else satisfied their palates.

Darlene and David Gengel have been coming to this roast for more than a decade, and they were back on Wednesday with their sauces and knives for more of Darlene’s favorite oysters, she said.

“They’re salty and they’re large and they cook them just right,” she said.

Students in Nansemond River High School’s Future Business Leaders of America club were among those volunteering their sweat from the fires to the seven extra-long tables on the lawn that were packed with people.

“Everybody came together to make it happen, and that’s what Rotary is all about,” Venable said.

Local organizations and charities benefit from the event’s proceedings each year, with Coalition Against Poverty in Suffolk and the Western Tidewater Free Clinic among those benefiting this year. Hundreds of tickets are purchased each year for more crowd-pleasing camaraderie by the water.

The Wagners first experienced the North Suffolk Rotary roast last year. It was a nice surprise, Kyle Wagner said, and they came back to spend time with friends and family in the club and in other organizations that support the roast.

“You come here to see everybody,” he said.

So, why does everybody come to the oyster roast? That was put simply by Edward Goode, who has been coming to the roast with Barbara Kays and others for more than eight years.

SPSA votes Wheelabrator back in