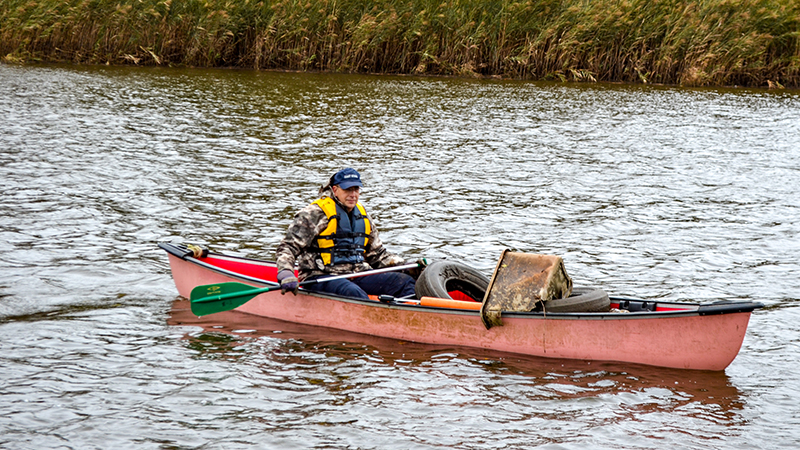 Jeff Westling, Chair for the Colonial Trail District of the Colonial Virginia Council for Boy Scouts of America, paddles along the Nansemond River at Constant’s Wharf Park and Marina during the Saturday cleanup.

About 60 volunteers made their way to Constant’s Wharf Park and Marina on Saturday morning in the cold wind and rain that made for dreary cleanup conditions. It was a muddy morning for those on kayaks and boats, plus the others on land in downtown Suffolk.

“It’s very wet, and our shoes are soaked,” said 17-year-old Kaylea Spiroff with Sea Scouts Ship 16 in Suffolk. She and some of her fellow Scouts spent the morning looking for garbage along the Nansemond River bank. “It’s actually like an adventure,” she added.

The Nansemond River Cleanup organized by Keep Suffolk Beautiful lasted for three hours. Volunteers received safety vests, gloves, grabbers and trash bags. Pool noodles were attached to extra-long grabbers that went with kayakers and others on their own, personal watercraft.

“It’s definitely not calm, but it’s not horribly bad,” volunteer Mackenzie Heard, 15, said after she dropped her paddle and got out of her kayak.

This cleanup was the last of three major waterway cleanups that Keep Suffolk Beautiful organizes annually. The last major one was Clean the Bay Day in June, during which 150 bags of trash were collected along with larger objects, according to Wayne Jones of Suffolk Litter Control and Keep Suffolk Beautiful.

Saturday’s cleanup was another sizable haul, including three shopping carts, roughly a dozen tires, and even a saw horse that was about 14 feet long. There were pieces of doors, car fuse boxes, shoes, empty beer cans and one lone coconut buried in the weeds.

Jones estimated that volunteers had filled up at least 50 trash bags with debris from recent storms and everything else that people just discarded.

“They just dump stuff in the river,” Jones said. “Some of it washed into the river in the storms, but a lot of it is just negligence.”

Suffolk Fire & Rescue and the Nansemond River Preservation Alliance were among the groups that assisted on Saturday, along with King’s Fork High School’s JROTC, Boy Scouts of America and Sea Scouts Ship 16, which meets at Beech Grove United Methodist Church in Driver.

The Saturday crew helped to rid the waterways of storm debris and other contaminants that find their way into the river all too frequently.