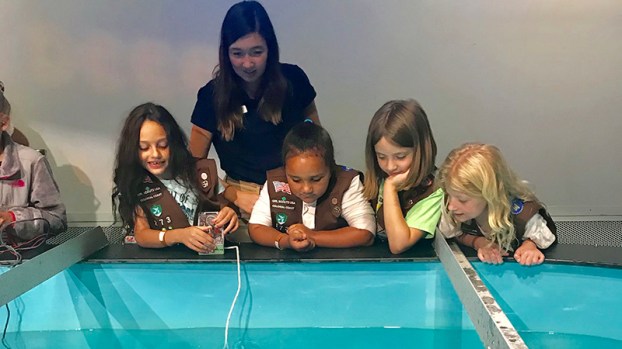 Nauticus, in partnership with Girl Scouts of the Colonial Coast, hosted their fourth annual STEAM night on Oct. 13, an evening of science, technology, engineering, art and math-themed activities for local Girl Scouts. The event allowed Girl Scouts to satisfy requirements toward earning new badges such as “Designing Robots” and “Space Science Investigator.” The badges are just a few in a lineup of new ones that were released by Girl Scouts of the United States of America earlier this year. The new badges are centered on environmental stewardship, space science, robotics and more to help girls create positive change in their communities.

Girl Scout Brownies, Juniors and Cadettes explored science through hands-on activities, including one that allowed them to touch sharks and horseshoe crabs while learning about their life cycle. A special engineering station featured girls from GSCCC’s Remotely Operated Vehicle team, which won first place in the Mid-Atlantic Regional ROV Underwater Robotics Competition in April this year. The girls helped lead the station and assisted their fellow Girl Scouts as they constructed their very own ROVs and put them to the test.

Additional highlights from the night included learning about STEAM careers from women and men in those fields, marine life and environmental concerns such as global warming.

STEM is an essential part of the Girl Scout Leadership Experience. It represents one of the four pillars the organization is centered on. Events like the Nauticus STEAM night show girls that they are capable of anything they set their minds to. According to the Girl Scout Research Institute, it’s because of Girl Scouts that girls are interested in STEM. Girls attribute their increased interest in STEM activities, classes and careers to the STEM programs they engage in through Girl Scouts, and say that these programs have made more of an impact than other programs in which they have been involved.

“Activities like these are really important because we need girl scientists and engineers and it won’t happen without events like this one. So many minds are untapped because they aren’t exposed to STEM at a young age, but Girl Scouts fixes that,” Girl Scout Ambassador Natalia Barber said. Barber served as the chief financial officer on GSCCC’s ROV team this year.