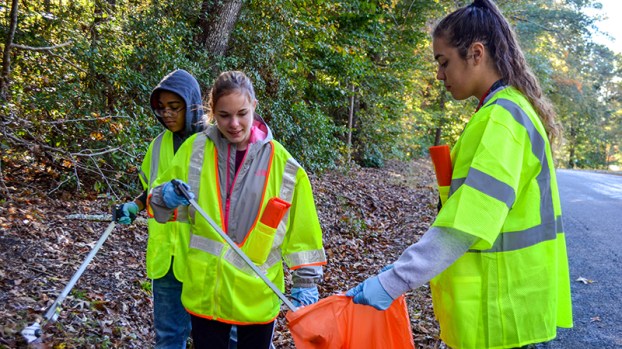 Picking up for Veterans Day

Lighters, soda bottles, beer cans and other discarded trash were collected by more than 60 volunteers on Saturday who walked and scoured and filled their trash bags within a roughly 10-mile radius around the Albert G. Horton Jr. Memorial Veterans Cemetery in Suffolk.

This cleanup was organized by Keep Suffolk Beautiful last weekend in order to help prepare the area for the Veterans Day weekend. Volunteers young and old met early Saturday morning at the Lake Prince Boat Ramp to get their safety vests, gloves, grabbers and trash bags.

They were also introduced to U.S. Navy Capt. Roy Henderson, who appreciated the turnout on a cold and breezy morning in fall weather.

“Your important work today is going to make it very nice and clean for people that are going to be coming from all over the place,” he said referring to the friends and families that will visit the cemetery on Veterans Day.

Teams spread out to different roadways to pick up more than 100 bags of trash, according to Wayne Jones of Suffolk Litter Control and Keep Suffolk Beautiful. They cleaned while being mindful of oncoming traffic and the rest of their surroundings.

“It went really well,” Jones said. “We did all the roads we wanted to do. We also did parts of Matoaka Road.”

About 40 of the volunteers were King’s Fork High School JROTC, according to 17-year-old Public Affairs Officer Haley Grizzle. The KFHS senior walked with some of her fellow cadets along Girl Scout Road and down Milners Road as part of a group led by American Legion Post 88 Commander Gerry Soucheray.

Haley and her fellow cadets enjoy participating in cleanups like this, especially if it means helping the veterans’ cemetery.

“We have cadets whose parents work there, and we do a lot of community service for them,” she said.

“The little red ones with the gold tips,” Cadet Lt. Col. Brianna Kosko, 17, said as the ammunition fell into her trash bag.

There was only more and more litter to find with each step they took.

“It’s sad and disgusting,” said Cadet Isaiah Scott, 15, as he picked up yet another empty fast food cup.

Soucheray walked with the cadets with grabber in hand. He said that they managed to find bags’ worth of garbage before leaving the scene improved for visitors this Veterans Day weekend.

“It’s the little things that you eventually find,” he said.