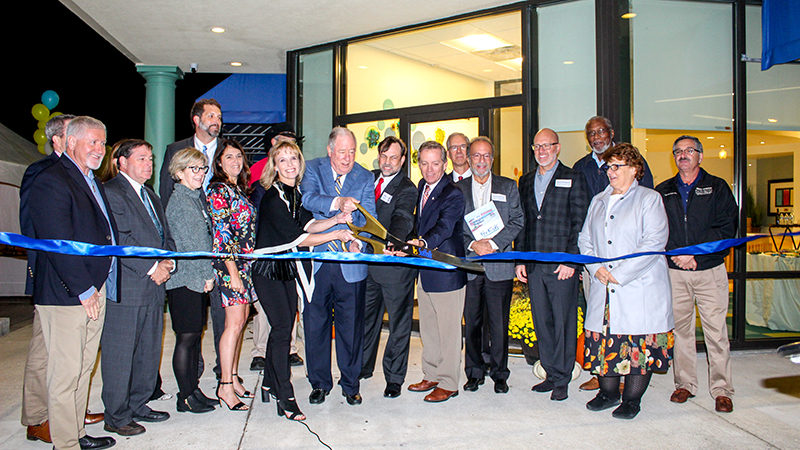 Despite the cold, a crowd of about 100 people gathered to witness the ForKids Suffolk Regional Services Center grand opening celebration on Thursday evening.

The 7,000-square-foot building, located at 119 W. Constance Road, will serve Suffolk, Smithfield and Isle of Wight and Southampton counties. The renovation and rebuilding of the old Kelly’s Tavern was funded by a $2.25-million fundraising effort.

ForKids’ Chief Executive Officer Thaler McCormick was more than excited to share the moment with the community.

“The facility looks great,” McCormick said. “I am so proud of this building and happy to have you all here.”

The building features a computer lab, a full-sized kitchen, a pantry, a Mini Mojo donation facility and multiple playrooms and offices for children and their families.

Thanks were extended to the companies that worked to make the facility functional and friendly for those that they will serve. Hourigan was the construction manager, and Tymoff-Moss Architects provided the architectural design of the facility.

The building was filled with art, and McCormick was proud to say that most of the artwork shown in the building was from children who have benefited from ForKids programs and services.

“As you walk through the building tonight, this is a dedication but also an art opening,” McCormick said. “The primary artists shown are ForKids kids.”

One of McCormick’s favorite pieces in the building was the donor wall that is featured just inside the door. The wall is covered in art by Randy Beard. It features plastic pieces covered in resin and speckled with alcohol ink. Beard donated dozens of pieces to the facility.

The Suffolk facility is also known as the Birdsong Center for Families, and it is dedicated to George Birdsong.

Birdsong was invited to be a part of the fundraising efforts for the new facility, and he was the Suffolk Campaign Chair. He has been involved in helping the homeless in Suffolk since long before ForKids came to the city a decade ago, and he was more than happy to help with the building near the corner of North Main Street and West Constance Road.

“This facility serves not only Suffolk but Southampton, Isle of Wight, Franklin and Smithfield,” Birdsong said. “The assistance this facility does is massive. Not only do they find shelter, but they help with other critical things like finding employment.”

Birdsong reminded those at the event that the work is never done and donations and volunteers are always needed for ForKids.

Delegate Chris Jones was also in attendance for the event. Jones and McCormick have been longtime friends and have worked to help with homelessness in Western Tidewater.

“For me, this is a wonderful opportunity to see things like this happen and just go, ‘Wow,’” Jones said. “I am grateful to see the commitment of the community and a willingness to help those in Western Tidewater. I can think of nothing better than serving kids.”