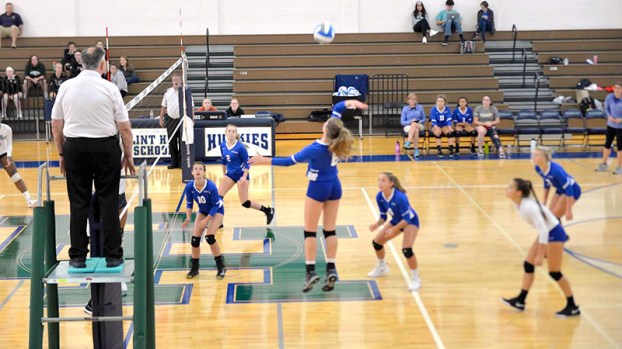 Addy Greene was voted Suffolk News-Herald Player of the Week after posting 17 kills and 16 digs in the conference tournament semifinals for the Lady Saints. (Submitted Photo)

Greene even better in junior year

Addy Greene was voted Suffolk News-Herald Player of the Week after posting 17 kills and 16 digs in the conference tournament semifinals for the Lady Saints.

The Nansemond-Suffolk Academy volleyball team is in the midst of another strong season. The team has finished in the top half of the conference while also advancing to the conference championship. Greene has been playing well along the way. Her 17 kills and 16 digs in the conference semifinals helped NSA advance to the finals.

For the last few weeks, NSA has been playing a high level of volleyball. They have won 12 of their last 13 games. With two upsets coming in the last week of the regular season, Greene has felt strongly about how the team has been playing.

“It is super exciting to see that we are playing as if we have nothing to lose,” she said. “We are fearless, and it definitely shows on the court when we do what we know we can do. We have worked so incredibly hard this year. We have proven people wrong, and we hope to keep doing that.”

Last season was a strong one for Greene. As a sophomore, she was the Conference Player of the Year and an all-state player. Her strong sophomore year led to her earning the 2017 Suffolk News-Herald Fall Female Athlete of the Year. In her junior season, she believes she has gotten better and gives all the credit to her teammates.

“I feel like I’ve played well with the help of my teammates and coaches,” she said. “They are so supportive, and they never fail to have my back.”

Proving people wrong was a motivating factor for Greene this season. Because NSA is a small team, they want to go out and get statement wins against the bigger teams that they face. NSA could be considered outmatched size-wise about anytime that they play, but when the team dominates, it is definitely added motivation for Greene and her teammates.

As one of the captains of the team this season, Greene has continued to grow in a leadership role. At times where it should be a stressful situation, Greene doesn’t believe it is, because she enjoys working with her teammates.

Before the season started, she didn’t have any statistical goals set for this season. The main goal was the team’s success and where she envisioned the team being at the end of the season — with a championship.

“Playing with this team is awesome, and having something to prove makes it even better,” she said.

NRHS takes battle of the Warriors

Nansemond River High School advances to the second round of the Class 5A playoffs after a dominating home win Friday... read more