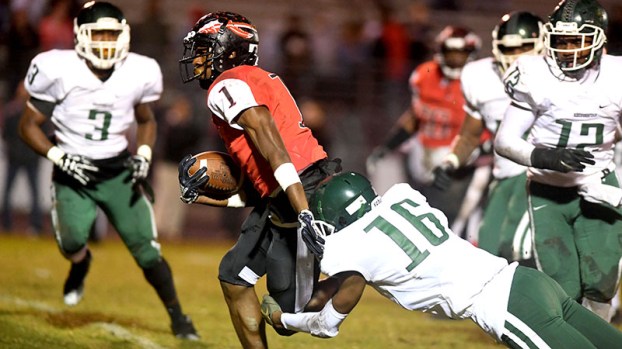 NRHS takes battle of the Warriors

Nansemond River High School advances to the second round of the Class 5A playoffs after a dominating home win Friday night against Kecoughtan High School.

As the two Warriors lined up for a battle, NRHS showed who the top Warriors were. For the second consecutive week, Nansemond River’s defense stood tall for another shutout.

It was a solid win for a Nansemond River team that has picked up five wins in a row and even more momentum going into the second round of the playoffs.

“Our kids were prepared,” Coach Justin Conyers said. “Those guys went out there and held their own. We are proud of the way we got it down out there.”

It was all Kevin Johnson in the first half of the Friday night showdown. He went on to score twice and create multiple turnovers in the first half. He helped the Warriors get on the board first with a 13-yard touchdown run with nine minutes to play in the first quarter. His interception set up the score.

In a little less than a three-minute span, Johnson put the Warriors back on the board again with an 80-yard fumble return for a touchdown, giving Nansemond River a 14-0 lead for the first quarter.

“It felt good,” Johnson said. “We just came out strong and dominated from the start.”

Rashaad Williams added a rushing touchdown with a conversion to give Nansemond River a 22-0 lead in the second quarter. The score remained that way at halftime.

Johnson didn’t stay out of the end zone in the second half. He added a 59-yard run for a touchdown in the third quarter to push the lead to 28-0.

Williams one-upped his fellow senior, adding a 96-yard run of his own for a score to push the lead to 36-0 after a two-point conversion with 6:10 to play in the third quarter.

A field goal in the fourth quarter set the final score at 39-0 as Nansemond River defeated Kecoughtan. It was Conyers’ first playoff win as a coach.

“We’ve been working hard trying to get better each week, and it showed,” Conyers said. “We even had guys step up in our coaching staff. It just a testament to how hard we prepare as a team.”

Nansemond River will match up with Indian River High School next. That is a rematch the Warriors have had set in their sights for a while.

Saints shut out in a home playoff loss

The Saints football season came to an end after a 36-0 home loss to North Cross School Friday night. In... read more