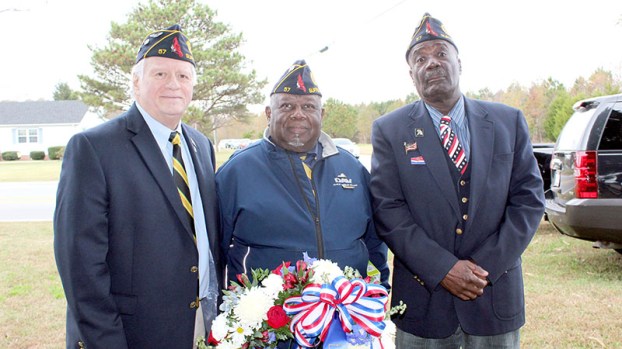 Despite the cold temperature, family gathered in the Waters-Johnson Cemetery to celebrate Veterans Day.

Baker gave a brief history of U.S. wars and the involvement of African-American soldiers.

“You may be gone but not forgotten. We won’t forget, so rest in peace,” Baker said. “Truly and surely you have fought the good fight. You give a new meaning to sacrifice.”

Garlitz shared the story of the American Legion and its importance to the city of Suffolk as he addressed the family.

“Officers joined together to create the American Legion. They did this to perpetuate and preserve the relationships made in the military,” Garlitz said. “They were still feeling the wounds from the Civil War, and this brings the country together.”

Post 57 in Suffolk was founded June 8, 1926, just seven years after the national organization was founded. Garlitz explained how the local group benefits the city and its citizens.

The American Legion Post 57 provides scholarships for students in the area, sponsors young boys for a trip, holds veteran recognition ceremonies and more.

The family ended the ceremony by asking the younger members to keep the tradition alive, including the Veterans Day ceremony, and keep the cemetery clean.

“This family thing, we need to keep it like this,” Johnson said.

More than 70 volunteers braved the rain on Friday to plant American flags at thousands of headstones and markers at... read more