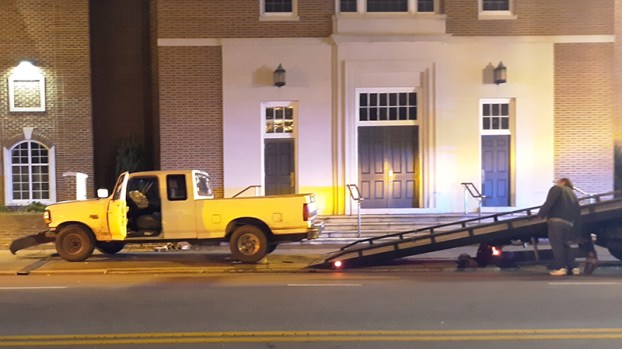 The passenger was hurt in a single-vehicle crash on Wednesday evening.

The driver fled and a passenger was hurt in a single-vehicle accident on North Main Street Wednesday evening.

The crash happened at 6:43 p.m. in the 200 block of North Main Street, directly in front of First Baptist Church near the intersection with Finney Avenue.

A city press release stated that an older model pick-up truck left the roadway, struck two poles and damaged a raised planting bed in front of the church.

The adult male driver fled the scene on foot immediately following the crash, the city press release stated. A police K-9 was at the scene.

The adult male passenger was ground transported to a hospital with injuries not considered life-threatening.

The southbound lanes of North Main Street were closed following the crash, but all lanes reopened to through traffic at 7:43 p.m., the press release stated. The cause of the accident remains under investigation.

Suffolk Public Library was one of 100 library systems nationwide chosen for the Great Stories Book Club, and the library... read more