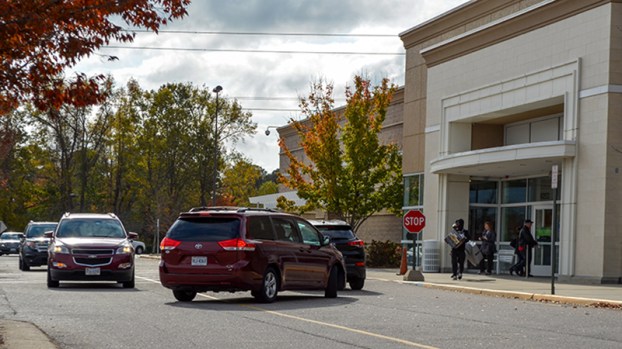 Shoppers brave the cold to get Black Friday deals.

Cars moved in and out of the Harbour View East shopping center parking lots, as bundled-up shoppers looked for Black Friday deals in the cold and breezy morning hours.

Foot traffic was steady in the parking lots around 10 a.m. Families and shoppers of all ages emerged from stores with bags in their hands, some holding sizable purchases and others pushing cart-loads.

It was the first Black Friday outing for Jeremy Jarvis, 21, and Samantha Turgeon, 20. The couple went out to get Christmas gifts for Turgeon’s siblings and were surprised to avoid madness in the stores.

“It wasn’t as hectic as I thought it was going to be,” Jarvis said beside their car. “It was a long line, but it went by pretty fast.”

Chesapeake resident Ashley Arthur thought the same, based on what she saw when she went shopping on Friday and Thursday night at Old Navy and Belk after Thanksgiving feasting. She was out with her sister looking for dog toys to replace the ones that her dog keeps ripping up.

It’s something fun for them to do every Black Friday, and this year seemed less hectic.

But there’s still 164 million spenders estimated to have shopping plans through Cyber Monday, according to an annual survey released on Nov. 16 by the National Retail Federation and Prosper Insights and Analytics.

The survey found that 34 million people planned to shop on Thanksgiving Day, while 116 million made plans for Black Friday. Small Business Saturday was expected to draw 67 million shoppers, 78 percent of whom said they did it to specifically support small businesses.

Holiday spending will continue into Cyber Monday, which is expected to draw 75 million buyers with online bargains.

“Whether it’s heading to the stores after finishing their turkey or going online on Cyber Monday, consumers will be shopping all weekend and retailers will be ready to meet the demand,” NRF President and Chief Executive Officer Matthew Shay stated in the press release. “Retail is a vibrant, dynamic and competitive industry, but one thing is certain — consumers are the winners no matter which day or which way they shop.”

Many people in Suffolk extended a charitable hand to their community in the week before Thanksgiving, and Saquan Branch was... read more