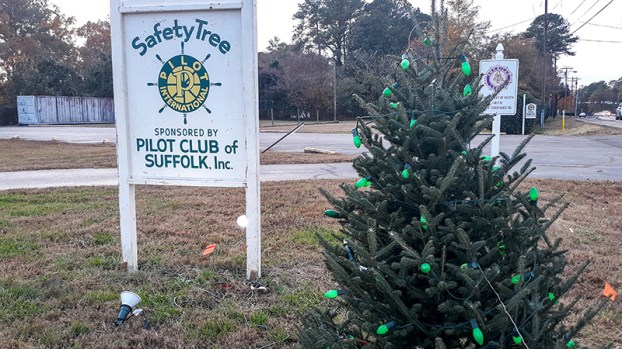 The Pilot Club of Suffolk’s Safety Tree stands in front of the Elks Lodge on West Constance Road. The goal is to keep the tree green all month long.

The Pilot Club of Suffolk’s annual tradition is back on display for the holiday season, and they’re hoping the tree stays green the entire month of December.

This is the 40th anniversary of the Safety Tree, which the club started in 1978 to promote traffic safety during the busy month of December.

“It’s a busy season, there’s a lot of people on the road, and we want people to drive safe,” said club Treasurer Cathy Richards. “The goal is for the tree to remain green the whole month of December, which means there are no traffic fatalities anywhere in Suffolk the entire month of December.”

The Christmas tree, donated by Mike Bibbo with the Knights of Columbus from the group’s tree lot on Pruden Boulevard, is posted at the Elks Lodge at 329 W. Constance Road. It is lit with green lights on Dec. 1, but for every person who dies in a traffic accident during December, the Suffolk Police Department will send an officer out to replace a green bulb with a red one.

December can be a hectic month, with lots more people shopping, attending parties and driving after dark. Richards said the club wants to remind people to slow down and pay attention to safety.

“It’s another way to bring awareness to the traveling public and the city to be safe.”

Richards said the club thanked the Suffolk Police Department, the Knights of Columbus and the Elks Lodge for their partnership in the program.

The classes are complete and the hard work is just beginning for Suffolk entrepreneurs with just over a month until... read more