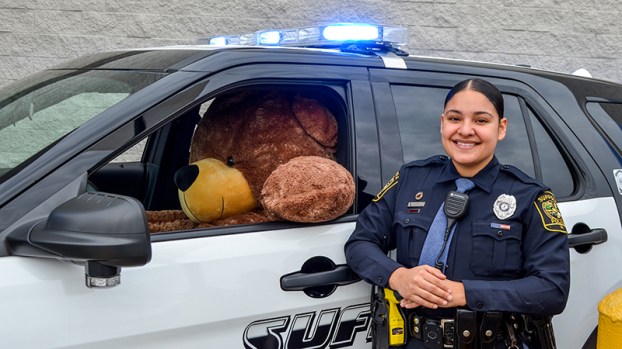 Suffolk Police Officer G. Hart shows off the big, stuffed bear in the driver’s seat on Saturday at the Walmart on College Drive.

About a half-dozen Suffolk Police officers were posted at both of the city’s Walmart stores on Saturday, smiling and stuffing their cars with donated toys under gray skies with a sharply cold breeze.

“This is our campfire,” Officer Ken Smith said next to police cruiser, its light flashing and engine rumbling and warm.

Law enforcement and office personnel staff were in front of the Walmarts at College Drive and North Main Street for their annual “Stuff the Police Car” toy drive. They were collecting new and unwrapped children’s toys, which will go to Toys for Tots for children in need.

According to Maj. Steve Patterson, the Suffolk Police Department collected 12 carloads of toys between both stores on Saturday. Bicycles, stuffed bears, footballs, playsets and more were stuffed in their cars. More than a few toy fire trucks were packed into their trunks.

Officers and citizens were both very excited to save Christmas for children whose parents couldn’t afford to buy them presents.

“This time of year, there’s a lot of kids who don’t even expect to get anything,” said Capt. John McCarley. “In my mind, if we can give something to those that don’t have any hope, then it’s a worthwhile project for me.”

People drove up to the College Drive Walmart entrance with toys in their cars. Others like Linda Eason came out of the store with their carts filled with toys to donate.

Eason said it was simply the right thing to do this time of year.

“I work for the FDA, and I’m always trying to help the consumer,” she said with a Sea Patroller playset and radio-control Jeep for the cause. “I feel compelled to do something for the children too.”