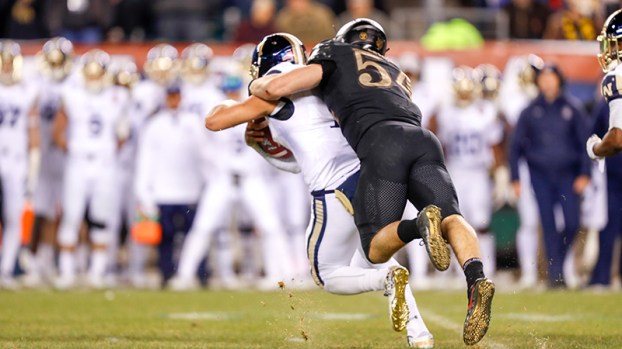 Cole Christiansen makes a tackle during the Army-Navy game. Christiansen is first on the team with 12.5 tackles for loss. (Army photo)

Suffolk native Cole Christensen has been enjoying a solid junior season for Army at West Point.

Army currently sits with a 10-2 record and is among the top 25 teams in the country in the NCAA weekly Associated Press polls. Army’s only two losses have come against other ranked opponents in Duke and Oklahoma. Oklahoma currently has a chance to play for an NCAA National Title and is the No. 4 team in the country, and Army lost to them by only seven points, 28-21.

Christiansen, a junior captain this season, is second on the team in tackles with 71. He leads the team with 12.5 tackles for a loss. With this being his second year starting, Christiansen has lived up to the expectations he has had for himself and people around him.

“I had high expectations, and I feel like I had a productive year, but there is always room to get better,” he said.

Last weekend, Army played in the 119th annual Army-Navy rivalry game. As a captain, Christiansen was able to meet with President Donald Trump, who did the honorary coin toss. Army took the game 17-10, and Christiansen called it a great honor to be able to speak with the president before the game.

“The Navy game was amazing as always,” he said. “Especially being able to speak with the president and stand out there with him on the big stage.”

Army will play in the Lockheed Martin Armed Forces Bowl against Houston. As a group, Army has high expectations for themselves, and Christiansen is excited about the opportunity to be able to accomplish them all with a bowl win.

“We are definitely on track to accomplish the things we wanted,” he said. “We won the Commander-in-Chief’s trophy and earned a bowl game. We are 22 right now in the AP poll, and with a win, we hope to finish in the top 25, which will be another one of our goals we accomplish.”

NR swim off to a strong start

The Nansemond River High School swim teams are off to a strong start in this early part of the season.... read more