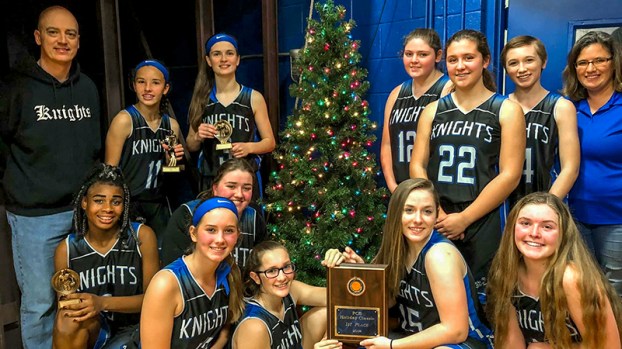 The Lady Knights took the title in the Portsmouth Christian School Holiday Classic.

The Suffolk Christian Academy girls’ basketball team took home its first trophy of the year Tuesday night. SCA played two games in the tournament, resulting in a title and two straight wins for the first time this season for the Lady Knights. They took on Portsmouth Christian Monday night to open the tournament and got a 35-26 win. The next night, they took on Tabernacle Baptist and won 39-25 to win the tournament.

“It was a great experience for us,” Coach Kristy Patton said. “We were coming off of some tough losses. We knew we had some cleaning up to do if we wanted to be competitive in this tournament. The girls did what they needed to do.”

The win came at the right time for the Lady Knights as they were dealing with a tough loss. Earlier this week, a member of the team lost her mother, who is also the assistant coach’s wife. The Knights knew that both of them wanted them to go out to play their hardest, and they did.

“The girls said we wanted to go out and play for Mrs. Stephanie,” Patton said. “They wanted to dedicate that tournament title to her. We had a good team effort for probably our first time this season.”

One of the keywords SCA goes by this season is family. If one hurts they all hurt, so to rally around and play as a team, Patton knew the girls believe that it was much more than just basketball. Win or lose, they knew they had each other’s back, whether it was basketball or the game of life itself.

SCA won’t play again until the new year, but they feel good about where they are right now, even though they aren’t satisfied.

“There is always room for growth,” Patton said. “We can celebrate this title, but we have to stay hungry and keep working. We still aren’t quite where we need to be. We set ourselves up with a boost of confidence, though, knowing we go out and compete and play solid basketball.”

One thing the Lady Knights want to correct for the new year are their turnovers. In the three wins they have for the season, they still felt they turned the ball over too much. The Lady Knights will play again Jan. 6.