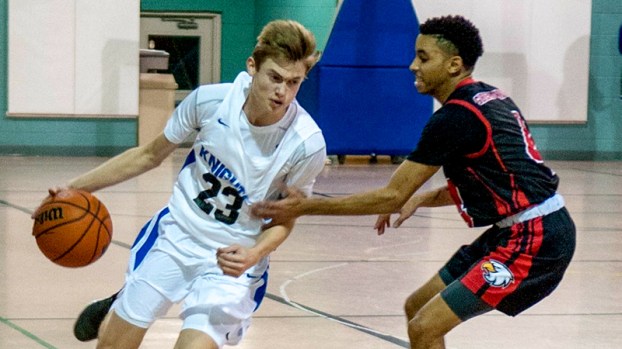 Alex Feeney of the Suffolk Christian Academy Knights blows by a defender. The Knights hope to go on a win streak for their second half of the season. (Amanda Puryear Photo)

The Suffolk Christian Academy boys’ basketball team remains winless, but the team is confident for the second stretch of the season.

For the first half of their season, the SCA Knights have gone through the toughest part of their schedule. At 0-7, they have faced bigger schools with more depth but have been competitive in most of the games. Most importantly, they have remained positive.

“We have played some tough games,” Coach David Daniels said. “We were in a lot of competitive games earlier on. Then there were a few games if we had done things differently were right there. The team is young, and we are still improving.”

The Knights don’t want to look at this season primarily for the win-loss record. With a young team, growth is important. As long as the Knights are putting their best foot forward every night, Daniels is happy with that.

Over the break, SCA was able to get in some critical some practice time. They didn’t play in any games over the holiday break, so to be able to work on a few things here and there was good. They have their sights set on improving more in 2019.

“Defensively, we want to continue to get better,” Daniels said. “We want to continue to play as one. We have a chance here coming up to go on a bit of a winning streak. Normally when the schedule is as tough as it was in the first half of the season, it eases up a bit in the second half.”

SCA will compete again Jan. 10 when they take on Lawrence Academy. It will be a good opportunity for a Knights team that can start off 2019 with its first win and build some momentum.