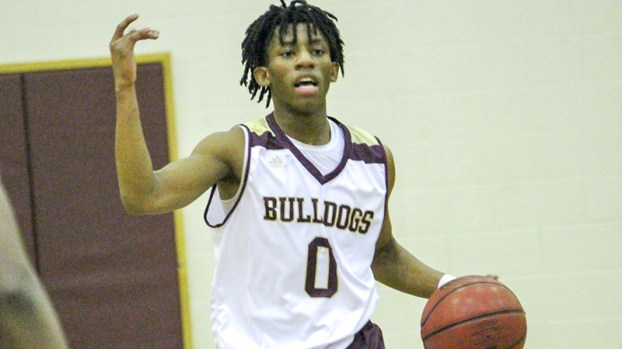 Keontae Boyette went for a game-high 28 points in a tough Bulldogs win over the rival Warriors. (Matthew Hatfield Photo)

The Bulldogs moved to 10-2 on the season after getting a road 70-66 win over the Warriors. It was an important win, as all three Suffolk schools have significant competition among each other for the city title this season.

Even though this was the first official meeting of the two teams, they were able to get a glance at each other a couple of weeks ago in the Bulldogs-hosted Holiday Tournament.

“We knew what we were getting into,” Coach Rick Hite said. “It was a tough, hard-nosed game with a well-coached team. We are fortunate to get a win no matter how we get it.”

King’s Fork got off to a strong 22-10 start in the first quarter. As usual this season, the Warriors turned up the pressure in the second quarter and started to claw their way back into the game, cutting the lead down to five with a score of 27-22 with 4:12 to play in the second quarter. Justin Fatherly had a good first half for the Warriors, as they went into the half down only two, with a score of 34-32.

Nylah Young put up another 30 points in the Lady Bulldogs’ win over the Lady Warriors Tuesday night. The King’s... read more