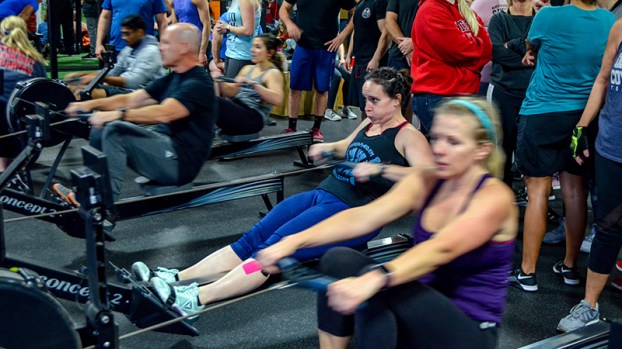 Julissa Armstrong controls her breathing as she pulls in the BURNfit Athletics Row-A-Thon held on Saturday.

Burning calories for a cause

BURNfit Athletics on Northgate Commerce Parkway was crowded with people on Saturday. The fitness center was loud with teammates’ cheers and the steady hum of eight rowing machines being put to hard use for a good cause.

There were 61 rowers spread across seven different teams for the center’s Row-a-Thon to support the upcoming Western Tidewater Walk to End Alzheimer’s, according to BURNfit General Manager Gus Altschuler. The event raised $2,100 for the Alzheimer’s Association.

Teams of four or more worked together to cumulatively row for 42,165 meters, or 26.2 miles — marathon distance. The three fastest teams were crowned victorious.

Teammates quickly switched places as they took turns on their rowing machines. The workout lasted for several intense hours that left each rower sore and sweaty.

“You can definitely feel it in your arms, and it’s very cardio intensive,” said Shawn Burks, 31, after he finished his 1,000-meter turn for Team Savage AF.

Teamwork made the grueling task possible. Each rower had one another’s back in the gym, every finished turn on the rowing machines was applauded and teammates never stopped cheering each other on.

“It’s not so much about going the distance. It’s about your team coming together and rallying, not just for you but also for a good cause,” said head CrossFit coach Jake Giles, who drew inspiration for the event from the CrossFit Games on ESPN.

Nicki Dalton finished the last leg of Team Backpack’s first-place finish, and her soundtrack was a raucous chorus of support from her team.

“They’re the best team,” Dalton said. “We won because we work together as a team. We had a little pit crew over here.”

Altschuler said that BURNfit is committed to doing more charity work this year, and since there were people at the gym that had personal experiences of family who had suffered from Alzheimer’s — including Altschuler himself — the Alzheimer’s Association made for a great partnership.

Alzheimer’s Association Development Specialist Barbara Monteith was grateful for BURNfit helping to spread the word on behalf of the organization, as well as the fundraising dollars.

The Walk to End Alzheimer’s is the world’s largest event to raise awareness and funds for Alzheimer’s care, support and research, according to act.alz.org. The last Western Tidewater walk in September was canceled due to Hurricane Florence, but $81,000 was raised leading up to the walk towards the organization’s $85,000 goal for the event, Monteith said.

The goal for this year’s walk is $90,000, and Monteith is confident that they’ll put it out this year.

“Everybody is very excited to do a walk again this year (because) we missed out on it last year,” she said. “We’re going to make it bigger and better than ever.”

This year’s Western Tidewater Walk to End Alzheimer’s will be held on Sept. 14 at Camp Arrowhead, 275 Kenyon Road. Visit alz.org for more information.

On Jan. 30, the North Suffolk Library at 2000 Bennetts Creek Park Road will hold the Alzheimer’s Association’s “Know the 10 Signs” workshop from 2 to 3 p.m., which is free to attend but requires registration. Call 1-800-272-3900 for registration and other information.

Girls keep running in Suffolk and beyond

Girls on the Run Hampton Roads has received a $25,000 grant from the Rite Aid Foundation to help the organization... read more