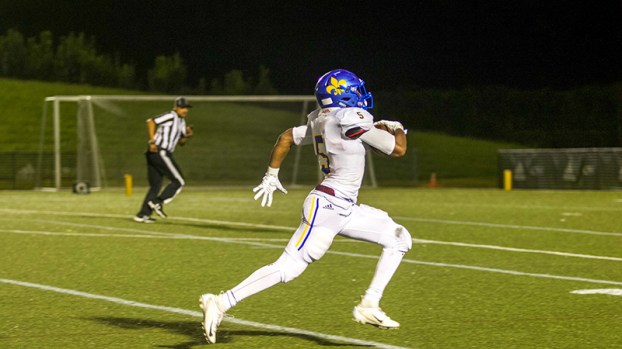 Ehron Knight was selected the Virginia Independent School Athletic Association Division II Co-Offensive Player of the Year. He had 47 catches, 757 yards and seven touchdowns. He was a first team All-State wide receiver and first team defensive back. (Jeffrey Dailey Photo)

The Saints had its best season under Coach Mike Biehl back in the fall. NSA finished the regular season with a 7-3 record, which made them go for the No. 2 ranking in the Virginia Independent Schools Athletic Association Division II state rankings. At times during the season, they were ranked No. 1 after starting the season off 7-0. They finished their season with a home playoff loss, but the Saints’ season could hardly be denied.

With the success they had, it led to eight players receiving All-State honors including the Co-Offensive Player of the Year honor.

“It felt good to be recognized,” Knight said. “My senior season was great, and I wouldn’t trade this year’s team for anything in the world. I enjoyed every second of it.”

Biehl was pleased to see his players get recognized.

“It’s always great to see guys who work hard and care about their program and teammates get recognized,” Biehl said. “The recognition isn’t what we shoot for regarding goals, but it’s definitely a byproduct of being a great teammate and great work ethic. I’m really proud of my guys.”

Biehl believed coming into the season that the team had its best offseason since he had started at NSA.

“I think those awards go hand in hand with our guys buying in and having their best offseason and as a result, we had our best season since I’ve been here,” he said. “For us, it will be illustrating to our returning players that it’s all connected and it’s all important if they want to build on the success collectively and individually.”