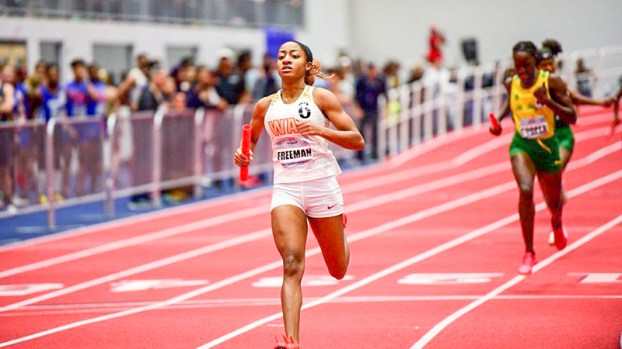 Lauryn Freeman crosses the finish line for Nansemond River High School as the 4x200 relay team completes a time of 1:37.84 at the VA Showcase at Liberty University. (Lisa McArthur Photo)

In preparation for championship season, Nansemond River has been fine-tuning things in meets that lead up to February. Last weekend, they went up to Liberty University to compete in the Virginia Showcase.

The 4×200 relay team of Tre’Breh Scott-McKoy, Lauryn Freeman, Brene’ Donaldson and Kori Carter ran a time of 1:37.84, which currently puts them as the fastest time in the country.

“You have to be happy with a performance like that, always,” Coach Marco McKoy said. “That time mixed in with the performance of some of our younger athletes made for a great meet for us.”

McKoy has been seeing the younger athletes learn and take advice from some of the accomplished veterans on the team. He described his group of veterans as special and, even though they ran a strong time in January, he believes the team will remain focused and dialed in.

“Whenever you run a time that fast, sometimes you have to put expectations in check,” he said. “You want to make sure you get back to work and stay extra hungry. We won’t change a lot. We’ll stay within the structure that we have that’s made us successful.”

Nansemond River will have a couple more meets before the regional meet in early February.

“We are getting better week by week. We have some young players who are continuing to learn and also have some veterans who have experienced every level of success. We have a solid foundation that we have been working on for years, and we are excited about what’s to come in these next few weeks.”