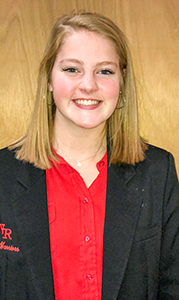 Taylor Paquette was voted Suffolk News-Herald Player of the Week after scoring 15 points in a Lady Warriors win over Hickory High School.

Taylor Paquette was voted Suffolk News-Herald Player of the Week after scoring 16 points in a Lady Warriors win over Hickory High School.

The Nansemond River High School girls’ basketball team is in somewhat of a rebuilding year, but one of the players that has remained a constant over the last couple of seasons is Paquette.

She transferred into Nansemond River as a junior and was immediately able to come in and make an impact. She came into this season as the only senior on the team, but she has accepted and ran with the responsibility that comes with that.

Last week, Paquette put up a team-high 15 points in a win over Hickory. What was so special about the win was that it was a 34-point win, and 60 was the highest point total of the season so far for the Lady Warriors. They have only won four games in the Southeastern District.

In the previous game, Paquette didn’t play well, so she was able to come out and redeem herself in a win.

“A win is always great, but I think as a team we worked well and had great ball movement,” she said. “That has been one of our goals, and that helped us get better shot selections. We worked as a team, and that made for a great game.”

Even though the Lady Warriors haven’t been winning as much, she can still see the improvement. In the last half of the regular season, she believes the team will continue to grow as a stronger unit. Paquette has taken on the leadership role and admitted that she was a bit hesitant at first. Last season, Briana Autry was the leader of the team. Paquette knew she had big shoes to fill after Autry graduated, but she embraced the challenge.

“This is a great group of young girls to lead,” she said. “Being a leader to me just means someone doing everything they can to make the group better as a whole.”

Losing can hinder confidence levels as a player. Coach R. Calvin Mason has said of his young team that there may be days where they don’t think they have gotten better, but they have.

Paquette knows the importance of continuing to push her team in those times. Mason has spoken highly of Paquette’s ability to be able to lead the team as well as the production she has provided.

“You definitely have to be mentally tough,” she said. “Not only are we young, but we are small as well, so we want to keep fighting like the Warriors we know we are.”

Coach Mason inspires Paquette. Personally, the team has watched him go through a few things and continue to fight, which has encouraged and inspired her as well as the rest of the team. Her team keeps her motivated. When she sees them on the court working hard with a ton of energy, she wants to work just as hard to match that.

The Lady Warriors believe all of their hard work will continue to pour in more wins before the season is done.