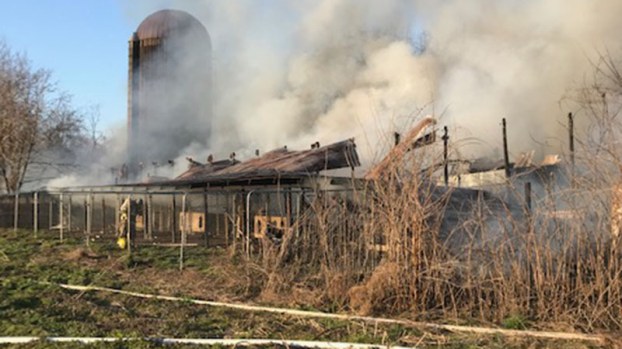 A barn was destroyed by fire on Wednesday morning on Nansemond Parkway. (City of Suffolk photo)

A barn fire off Nansemond Parkway on Wednesday left a dozen dogs dead, and the search continues for one of the dogs that escaped.

Emergency Communications was contacted at 7:23 a.m. after a passerby noticed smoke in the area of the 5100 block of Nansemond Parkway, according to the city press release. Fire Marshal Lt. Chuck Chapin said the barn was fully engulfed in flames upon arrival, but with no risk of fire to any neighboring structures.

The Fire Marshal’s Office determined that the fire was caused by a heat lamp that was left too close to combustibles, according to Chapin.

The fire was called under control at 8:35 a.m., but the barn and its contents — including farm equipment and vehicles — were declared a total loss.

There were 16 adult hunting dogs and eight puppies in fenced-in kennels adjacent to the barn, according to the press release. Chapin confirmed that four of the adult dogs and all eight puppies had died. Earlier information from the city had indicated that all the animals were rescued alive.

Witnesses who observed the fire and had initially contacted Emergency Communications started rescuing several dogs before the flames became too intense, according to the press release.

Firefighters cut a chain link fence to rescue three of the adult dogs. Others helped search for the dogs that had escaped the fire.

Heather Holmes found one of the dogs deceased on the road. She called the number on the collar and returned the dog’s remains to its owner, then made an online post for help in finding the others on the Facebook group “Lost & Found Pets — Hampton Roads, VA.”

Before long, Holmes was joined by five other ladies — plus a gentleman, she said — and spent the better half of the day walking, driving and searching.

“There was probably eight to 10 other people that saw the post and who were just driving around on their own,” she said.

Friends of the property’s owner had come out in droves to help. Holmes said that there was already a “good group of people” at work by the time she had arrived on the scene.

“These owners had an amazing network of friends and family that were out there from the moment that it began,” Holmes said.

Eleven of the missing dogs have been found as of Wednesday evening, including the deceased one that Holmes had recovered, according to her Facebook post. One dog is still out there, wearing a “bright collar” like the others. Volunteers are urged to keep looking.

According to the Facebook post, donations to the owner can be made at Lester Brothers Auto Repair, 1156 Portsmouth Blvd. Recommended items include dog houses, straw bedding, water buckets, food bowls and dog food. Visit facebook.com/groups/lostandfoundpetshamptonroads for more information on the donations.

A man asked a Suffolk News-Herald reporter to leave the property on Wednesday afternoon when he attempted to gather information at the scene.