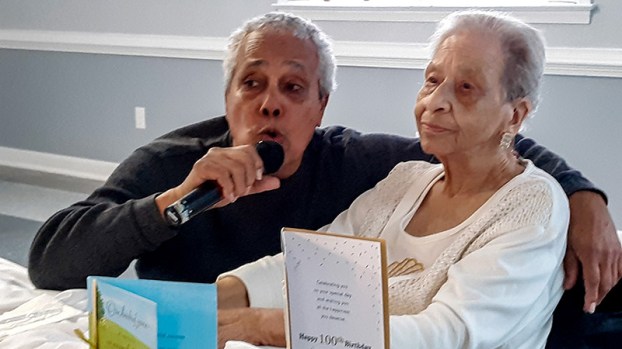 Odelia Faulk Hortillosa enjoys a “Happy Birthday” serenade from her son-in-law, Benny Williams, at her 100th birthday party on Saturday. More than 80 guests came to celebrate.

Odelia Faulk Hortillosa eyed the three candles on her birthday cake that formed the number “100” at her birthday party on Saturday.

Just before blowing out the candles to a round of applause, she made the humorously indignant proclamation, “I’m not no 100!” It generated laughter from the dozens of guests at her party.

Technically, she was right. Her official birthday is Feb. 12. But more than 80 family and friends were gathered on Saturday, Feb. 9, for the celebration.

They got to see Hortillosa, whom many of them called “Aunt Odelia,” in an unusually good mood. She allowed family to help her walk around the room, managed a few small shimmies to songs like “Cupid Shuffle” and frequently proclaimed that she wasn’t 100 years old, to the amusement of everybody. She and her family dined on pasta salad, lettuce cups with chicken salad, ham biscuits, chicken wings and beets before they enjoyed her birthday cake. It all took place at the Family Affair events venue on Jackson Road.

Hortillosa was born in Nansemond County, one of 14 children who survived that were born to James T. Faulk and Carthine Rodgers Faulk on Manning Road. Her seven brothers are now all deceased. She had six sisters, three of whom are deceased. Her three living sisters are 88, 94 and almost 98, and they were all in attendance at the party.

She had three children — two daughters, Odelia Scarangella and Lotitia Williams, and a son, Freddie Hortillosa. She also has 10 grandchildren and 17 great-grandchildren.

Hortillosa is active in the senior group at East Suffolk Recreation Center and also at her church, Gethsemane Baptist Church.

Her family said she enjoys painting and games and loves to travel.

Asked for her advice on longevity, Hortillosa replied, “I worked hard and ate food, and I worked on the farm, too.”

A part of North Main Street was closed most of Friday after damage to the railroad tracks near Prentis Street... read more