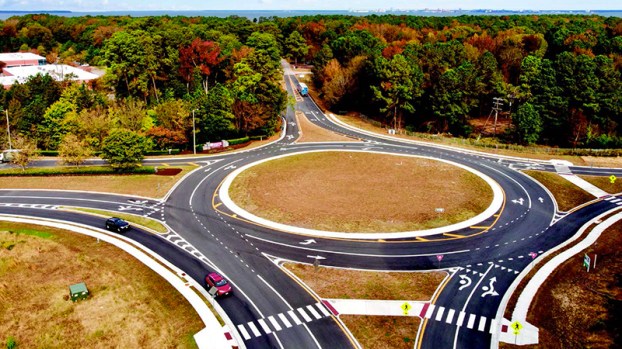 The American Public Works Association Mid-Atlantic Chapter recently recognized a pair of projects in Suffolk with Project of the Year Awards.

The Project of the Year Award for the Transportation Less than $5 Million Category went to the Harbour View/College Drive Roundabout Project. This project was designed by Clark Nexsen and overseen by Capital Improvement Project Manager Sandon Rogers.

The Project of the Year Award for the Transportation $5 Million but less than $25 Million Category went to the Nansemond Parkway/Portsmouth Boulevard Corridor Improvements Project which was a project handled in coordination with the Chesapeake. Suffolk’s portion of this project was designed by Clark Nexsen and overseen by Suffolk Civil Engineer George Mushett. Chesapeake’s portion of the project was designed by Kimley Horn Associates and overseen by Assistant City Engineer Sam Sawan with the City of Chesapeake.

The awards will be recognized at the APWA Mid-Atlantic Chapter Conference and Equipment Show in Norfolk on May 16. Additionally, these projects have been submitted for national award consideration.

The intersection of College Drive and Harbour View Boulevard in North Suffolk has seen tremendous growth in traffic volumes during the past 15 years as commercial development has continued to locate in this area of Hampton Roads that is ideally situated adjacent to I-664 and central to both Peninsula and Southside localities.

A roundabout was ultimately chosen as the best design solution to address the intersection geometrics and safety concerns, however, based on the tremendous growth projected for the area’s future traffic volumes, the design would incorporate not a single lane or even two lanes, but ultimately allow for the construction of a three-lane roundabout. While current traffic volumes did not warrant the three lanes, the design would allow for a third inside lane to be added as development pushed traffic volumes to a level necessitating the additional capacity.

The city recognizes the intersection in its 2035 Comprehensive Plan as a critical junction in the transportation network requiring improvements. The project was completed in the fall of 2018.

Suffolk and Chesapeake under a cooperative agreement completed the widening of the Nansemond Parkway/Portsmouth Boulevard corridor in the fall of 2018. The approximate 1.5-mile project provided not only much needed capacity and safety improvements for motorists along the corridor but also provided improved and safer access for bicyclists and pedestrians along the heavily traveled roadway.

The architecture and engineering firm Clark Nexsen provided design services on both projects and was responsible for putting the award submission applications together.

The American Public Works Association Mid-Atlantic Chapter Awards Program was established to recognize outstanding individuals and groups representing the best achievements in the public works profession in the chapter.