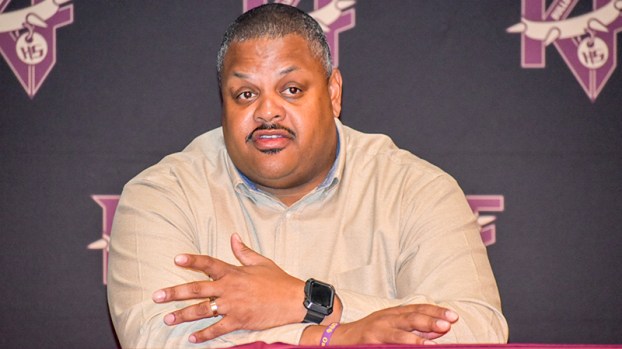 A month after coach Scottie Littles decided to move on, King’s Fork has found its new football coach. Kermit Buggs, formerly of Old Dominion University, was introduced in a press conference Monday.

Buggs comes to the Bulldogs program after spending the last few years in the ODU football program as a safeties coach. He also held the title of assistant defensive coordinator and recruiting coordinator. He was let go by the program in November following a 4-8 season.

However, Buggs does have a lot of college coaching experience under his belt. He also had coaching stints at the University of Connecticut, Lock Haven University and Penn State University.

His high school coaching career started at Surry County High School. In his first year there, he helped them to a state championship and a 14-0 record and was named the Virginia High School Coaches Association Coach of the Year. He led Surry to a Region A Division I Championship in 2000 and a semifinals appearance in 2002. From 1999-2003, he compiled a record of 34-14.

Coach Buggs will embark on this new journey as coach of King’s Fork with his wife and two children, who he says are excited about the new opportunity in front of him. With so much college experience, Buggs could have waited for another college opportunity to arise, but he felt like with the current landscape of college football he was OK with putting that part of his career in the past.

Buggs is looking forward to bringing discipline and a knowledge of the game to the Bulldogs. He wants to come in and build relationships with the players immediately. While the ultimate goal is winning championships, he wants to win the city of Suffolk first and then go from there.

“I’ve had some great experiences everywhere I’ve been, and I’ve learned some good things,” Buggs said. “Just building that nature of showing these young men what it takes to get to the next level. I’m excited about getting in and getting (accustomed) from everybody to the players to the janitors and bookkeepers. I want to come in and take this thing to the next level.”

Buggs is a Hampton Roads native and alumnus of Kecoughtan High School. From there he went on to play football at Norfolk State University. As of now, he is still putting his staff together for this season.