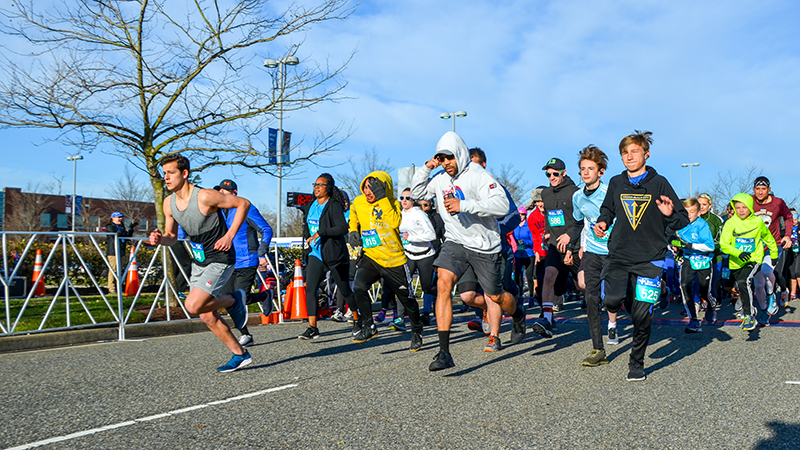 Runners take off at the start of the 5K in North Suffolk last year for the Bon Secours 5K for Colon Cancer and 1-mile Fun Wallk.

Participants can help in the fight against cancer this month by signing up for the annual Bon Secours Colon Cancer 5K and One-Mile Walk.

Presented by TowneBank, the ninth annual event will be held on March 30 at the Bon Secours Health Center at Harbour View, 5818 Harbour View Blvd.

On-site registration and packet pickup will begin at 6:30 a.m. Registration for the walk will end precisely at 7:55 a.m., and runners can register for the 5K until 8:15 a.m. Advance registration is also available through March 29.

The one-mile walk will begin at 8 a.m. and the 5K at 8:30 a.m. Food will be served and the awards ceremony will be held after all participants have finished. Awards will be given to the top male and female runners, but all runners that finish the 5K will receive a race medal. There will also be an award for the fastest team and first-place finishers per age group.

Additionally, all participants for both the 5K and one-mile walk will receive T-shirts.

“Our recommendation is to sign up in advance to ensure that you can participate and that we have a shirt close to your size,” Angela Courtney, senior development officer at Bon Secours Hampton Roads, stated in an email.

The event is considered the first colon cancer race in Hampton Roads and was started by a group of gastroenterologists and colorectal surgeons that wanted to bring more attention to the problem, Courtney said.

This group felt that a race was the best way to reach out to the community, with all proceeds going to cancer funds for Bon Secours DePaul Health Foundation and the Bon Secours Maryview Foundation, which will help provide care for local colon cancer patients.

“Colon cancer is one of the top five most common cancers in adults — although it’s also the most preventable and has the highest survival rate when detected early,” Courtney said.

Courtney said that last year’s event raised more than $20,000 to help these patients and more than 300 event participants, including 223 registered 5K runners and 84 registered for the one-miler.

Their goal is to raise $20,000 once again this year to help colon cancer patients at Maryview Medical Center and DePaul Medical Center, Courtney said. They’ve raised more than $16,000 and have 100 registered riders as of Tuesday.

Advance registration is $35 for the 5K and $20 for the one-mile walk, which jumps to $40 and $25 on the day of the event, respectively. Racers can also sign up in teams of at least three people, and each member of that team will receive a $5 discount for registration.