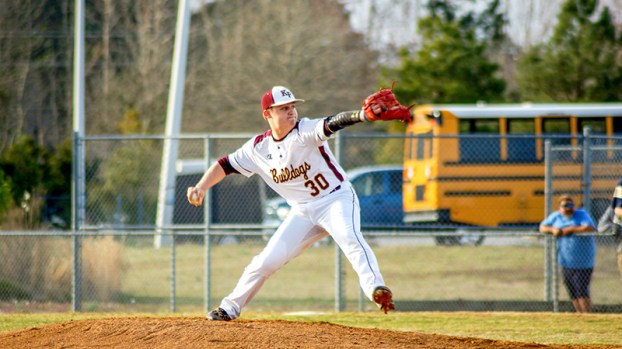 Landon Bonneville on the mound pitching for the Bulldogs. The Bulldogs are currently looking for their first win. (Caroline LaMagna Photo)

The Bulldogs baseball team is winless through eight games this season but hopes the slump doesn’t last too much longer.

The King’s Fork High School baseball team graduated some key players from last season, so the transition this year has been getting the experience needed for the Bulldogs to consistently compete at a high level. Coach Robert Hedrick sees the potential in the Bulldogs and believes they will eventually get there.

“We are playing hard every night, but we are young,” Hedrick said. “We are young on the mound and just about everywhere. For us, it’s just about finding and putting the right pieces in the right places and going from there.”

The Bulldogs have played a tough schedule to start the season. Playing within the Southeastern District, Hedrick knows that the team will see some of the best competition in the state. So, every evening the Bulldogs step on the field, they have to be at their best. Even though the Bulldogs remain winless, Hedrick keeps the team encouraged, because he knows the Bulldogs aren’t far from stringing together some wins.

“Even though we are not winning, the guys know we are close,” he said. “I tell the guys we are there, we just have to keep coming into practice working hard and getting better. Eventually, something is going to happen for us in the win column. It’s not fun to lose, but it’s fun to compete at a high level against these teams we see night in and night out in this district.”

One thing that has encouraged Hedrick to this point in the season is that the players want to get better. Each day they are coming to practice wanting to know what to work on and what to do better. King’s Fork did come close to a win last month when they fell 10-9 to Deep Creek High School. The Bulldogs learned that next time, they have an opportunity to close out strong.

Next for King’s Fork is a matchup with Lakeland High School at home at 5:30 p.m. Tuesday. It will be a good game between the two rivals, as both teams are looking to get more wins under their belts.