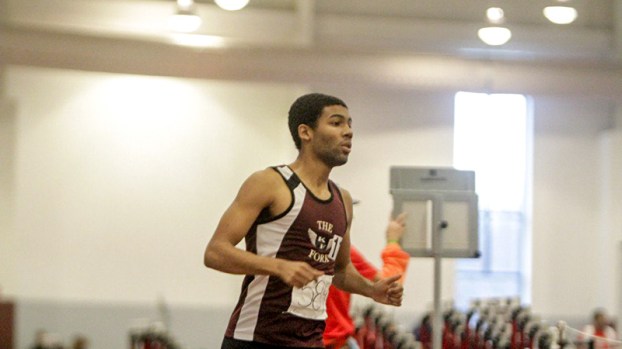 Shamond Smith competes in the indoor 1,600-meter run at the state meet for the Bulldogs. Smith returns as one of the top athletes in the region for the outdoor season. (Nolan Jez photo)

Bigger numbers for KF could lead to success

The King’s Fork High School track and field team feels good about their transition from indoor to outdoor season.

The Bulldogs are a couple of meets into the outdoor season and like where they are at right now. During the indoor season, teams normally have smaller numbers, because some athletes are competing in winter sports. However, those winter sports athletes come out to compete during the outdoor season. Since Coach Adrian Young has coached at King’s Fork, he feels the team’s depth is the most it’s been.

“We are on track to perform statistically better each meet,” Young said. “Since 2011 when I’ve been here, this has been the largest number of athletes we brought in for the outdoor season from basketball and other sports. So, we have a large poll of athletes to represent the school.”

During the indoor season, King’s Fork took a handful of athletes and performed well. Before the state meet, King’s Fork showed well in the Class 4 Region A meet, with the boys placing sixth and the girls placing ninth. Despite the team finishes, they had multiple top-three finishes.

Two meets into the outdoor season, the Bulldogs believe they are on track to achieve everything they want. They already have a few state qualifiers in events and are looking to add more as the season goes on.

Young has hopes that King’s Fork can make a run at an outdoor region championship. Their day by day approach is figuring out what’s best for the athletes and what events each athlete is comfortable competing in.

On the boys’ side, Shamond Smith brought home an indoor region championship in long distance, and he is looking to add to that. Devin Chambliss also looks to improve after he broke his own record in the shot put during the indoor season and was a top-two finish in the state. Caleb Giles will also be looked upon to do some good things.

Amari Urbanski finished top three in the region in the long jump for the girls. The Bulldogs will also add Alexis Banks. Relay teams on both sides will be expected to make some noise as well.

Lady Saints come in at three