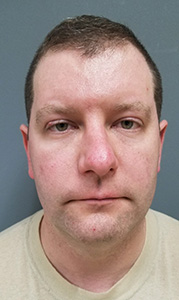 A Carrollton man has been arrested on one count of distribution of child pornography.

Gregory Wacks, 36, of the 1300 block of Beacon Hill Way, was arrested by deputies from the Isle of Wight County Sheriff’s Office.

Wacks was released on a $2,500 secured bond, according to a press release from the sheriff’s office.

The investigation and arrest were the result of the Isle of Wight County Sheriff’s Office receiving a cyber tip from Homeland Security Investigations, the news release stated.

“The Isle of Wight Sheriff’s Office continues to partner with the National Center for Missing and Exploited Children as well as Bedford County Sheriff’s Office’s Internet Crimes Against Children Task Force to investigate these crimes,” the press release stated.

The office also appreciates the investigative assistance of the Air Forces Office of Special Investigation Unit at Langley Air Force Base, the news release stated.

An Elephant’s Fork Elementary School student was cited for bringing a pocket knife to school Monday, according to school and... read more