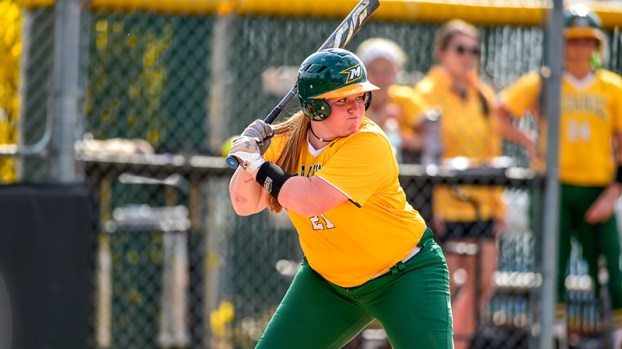 Madison Froemel was selected Centennial Conference Player of the Week after helping McDaniel College to a 4-1 record last week. Over the weekend, she hit her first collegiate home run. (David Sinclair/McDaniel College)

After leading McDaniel College to a 4-1 record last week, the former Lady Bulldog was selected Conference Player of the Week. She hit .636 and had seven hits out of 11 at-bats. Against Franklin & Marshall College last Saturday, she had a combined five hits in a double-header. Three hits came in the second game, and in that same game, Froemel hit her first collegiate home run. During that doubleheader, she also didn’t record an error at third base in 15 chances.

She gives credit to her teammates for helping her along the way to her weekly award.

“My team and I worked so hard, and it’s by far a grind,” she said. “I wouldn’t be able to be Player of the Week without my teammates and coaches.”

As a freshman, Froemel has been able to come right in and become a standout at McDaniel. At this moment, she has 25 hits and is tied for the team lead with 22 RBIs. She also has three doubles and a triple this season so far. Just having the opportunity to come in and contribute has motivated Froemel and has helped her get off to a fast start this season.

“I’m feeling great about this season,” she said. “It’s coming close to an end, and I feel like we are doing what we need to do to make the conference playoffs. I always make sure I give it my all when I step out there. We want to make this good for our seniors, so I want to do all I can to make sure their last year is eventful and proud.”

Froemel said she felt good about her rhythm coming into the season and knew she could hit the ground running. She admits that back in early March, she went through a slump and it took a little while to get out of, but she has since prospered.

At King’s Fork, Froemel was a part of helping the Lady Bulldogs reach the region semifinals. She was also selected All-District, All-Region and All-State. She was the first King’s Fork softball player to be selected All-State and in back-to-back years. For her senior campaign last year, she finished with 31 hits, 30 RBIs and 29 runs scored. She was also among the South Hampton Roads leaders in home runs with nine.

The Nansemond River High School baseball team took its first loss of the season last Friday in a matchup with... read more