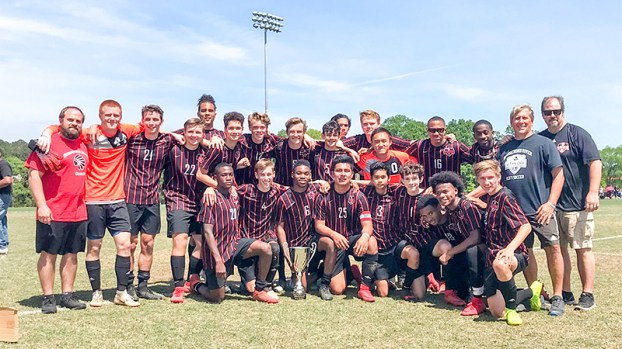 Over the course of three days, Nansemond River went 3-0-1. In the championship game on Wednesday, the Warriors faced off with North Augusta High School and won 2-1. The Warriors return home with an overall record of 7-0-1.

Tucker Leverone scored on an assist from Jason Cooney, and Justin Martinez scored on a free kick.

“The competition was good down there,” Coach Dustin Tordoff said. “It’s different from what we see in Hampton Roads. I am happy we how we were able to play, and it feels good to be able to bring a trophy home.”

The Warriors were scheduled to play their first couple of games in the morning, something the team isn’t used to; however, the players were able to adjust quickly and carry on throughout the tournament.

From a team bonding perspective, Tordoff believes the trip served its purpose. The team was able to do a couple of things, such as take a tour of the South Carolina State House. All around, the Warriors felt good about what they were able to get out of the trip.

Without an official loss on their record as they come back to Virginia, Tordoff still feels good about where the team is with the break coming to an end. The Warriors believe they are more battle-tested after competing in the tournament. The Southeastern District has some tough competition, and they know they will see some excellent teams soon.

“It’s always good to get the kids in an environment they are not used to,” Tordoff said. “Our district is a beast. We have some difficult games coming up, and so we hope playing in this tournament will help us going forward.”

Nansemond-Suffolk Academy seniors Colby Owens and Hyatt Hurst have both signed to play baseball at the next level. The Saints... read more