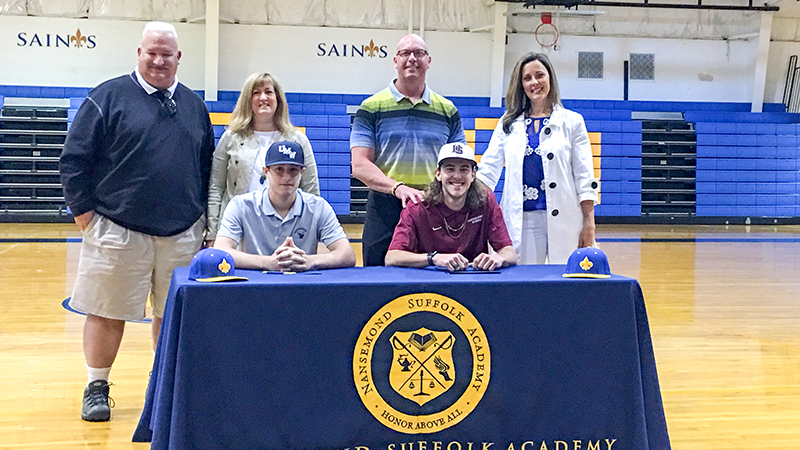 Hyatt Hurst and Colby Owens both signed National Letters of Intent to play baseball at the next level. Hurst, left, will play at the University of Mary Washington, while Owens will play at Hampden-Sydney College. (submitted photo)

Nansemond-Suffolk Academy seniors Colby Owens and Hyatt Hurst have both signed to play baseball at the next level.

The Saints have added more players that will be playing in college. Seniors Colby Owens and Hyatt Hurst both signed National Letters of Intent Tuesday afternoon to make their signings official.

Owens will attend Hampden-Sydney College, and Hurst will attend the University of Mary Washington.

Hurst, in particular, transferred into NSA for his senior campaign and has been able to help the team. Over the summer, he competed in different tournaments to get seen by different coaches. Hurts admitted that when he decided to attend NSA, he didn’t know what to expect; however, he’s enjoyed his time being able to compete alongside his teammates.

What ultimately helped him commit to Mary Washington was talking over things with his parents and others closest to him about the things he was looking for in a program, and Mary Washington met those requirements.

Owens had an interesting journey before deciding to play baseball at the next level. He said playing at the college level was a dream of his since he was young; however, back in the fall, he decided to not pursue that dream. But after taking a few months to think about it, he decided that he’d go ahead and play. He went on a visit to Hampden-Sydney and fell in love with the school

“HSC has so much to offer in regards to education and a great baseball program,” Owens said. “The second I went on my official visit, the coaches made me feel at home. From that point, I knew that’s where I wanted to be for the next four years.”

Both Owens and Hurst feel good about how their senior seasons are going so far. Owens has a no-hitter under his belt and a current ERA under 1.50. Hurst has hit well at the plate. Though the season isn’t over yet, both feel like they can take things up a notch for the Saints as their season heads into the latter half.