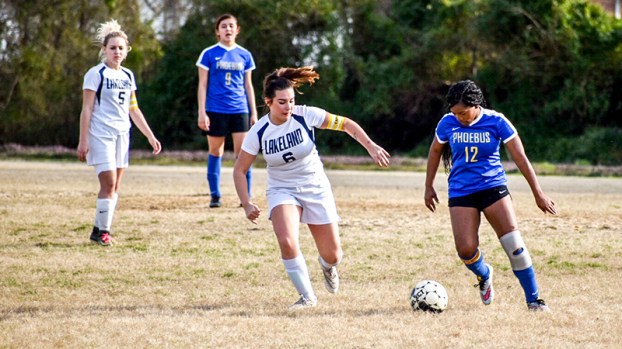 Nacaccia Becerra battles it out with a Phoebus High School defender. As Lakeland heads into the second half of the season, it sits at 4-2 on the season, and 3-1 against region opponents.

At 4-2 heading into the second half of the season, the Lakeland High School girls’ soccer team is happy with what they have done so far.

When the Lady Cavs return from break, they will head right into Southeastern District play. It’s significant because with Lakeland being the smallest school in the district, it has to capitalize on opportunities to win games.

“We are 3-1 in our region, and that’s pretty good,” Coach Adam Smith said. “When we are playing in our region, we are really competitive, and we are getting better every day. I am happy with the way we have progressed.”

Smith believes his team has played well in its six games. They have been able to compete well against teams in the same region, and Smith believes that has been good preparation for what’s to come when Lakeland plays larger schools.

“We have to continue to work hard against these bigger schools,” Smith said. “We can’t give up, and we can’t quit. “I think this is the best team I’ve had since I’ve been at Lakeland and I believe we are going to surprise some teams.”

The Lady Cavs believe their district games will be more competitive than in the past. Lakeland will look to improve offensively and score more goals, which will help against the district’s more talented teams that don’t struggle to score.

Coming out of the break, the Lady Cavs are set for three games, taking on Deep Creek, Hopewell and Grassfield. Lakeland wants to be able to come out of that stretch with three wins.

“I’m confident in our abilities and how we match up with certain teams,” Smith said. “Yes, you have to be realistic throughout the process, but I feel comfortable saying coming out of the break we can do some good things.”