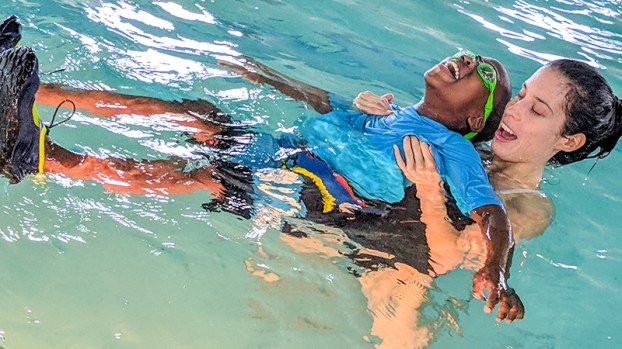 Suffolk Family YMCA swim instructor Christine Quiroga helps one of the 220 children who came out for free lessons during spring break last week. The instructors taught the children how to get in and out of the water and built upon their skills during the week-long program.

Kids swim through spring at YMCA

Aquatics Director Kelie Garrett said that, thanks to a $5,000 grant from the Obici Healthcare Foundation, kids from kindergarten through fifth grade had a chance to take instruction and hone their swimming skills. The YMCA offered kids half-hour lessons from 1 to 6 p.m. each day.

“People just went crazy,” Garrett said about the first-time program. “We even had waiting lists for some time slots, so we were really fortunate to be able to offer this program to the kids in the community.”

She said some of the kindergarteners, by the end of the week, were able to swim halfway across the pool, and fifth-graders were diving in the pool and doing backstrokes.

“We’ve really seen a lot of progression,” Garrett said. “The instructors have been extremely pleased with how the children came out, and everyone’s just so excited and happy to be here, which is what we really want.”

With summer coming, Garrett said it was important for kids to have the extra swimming skill.

“We always start with safety,” Garrett said. “How to get in the water, how to get out of the water, making sure you ask permission. Those are our key things we start with. Once we hit that mark, we push the kids to what they’re able to do.”

Sylvia Kitchen was watching her 10-year old granddaughter Emma Hernandez swim and could see the joy she was having as she was practicing her new skills.

“This week was very nice that they did that,” Kitchen said of the spring break program. “The YMCA really did a good job for all the children. They loved it.”

Hernandez, who already knew how to swim and was comfortable in the water, was thankful for the extra lessons and the time in the pool.

“I was glad that they had it so I could swim,” Hernandez said. “I actually learned more. This week I learned how to dive properly, and I just learned how to do my strokes a lot better and I learned different strokes that I didn’t know.”

And that was the point, Garrett said. They wanted children to pick up new skills while having fun.

“The parents are happy,” Garrett said. “The kids are happy. … They really want to be here, and they really enjoy it. Even the instructors are having a good time. I really pushed to them (that) we’re making a difference this week.”

It was a small but enthusiastic turnout for the FabulouZly Fit & Finer 5K Walk/Run on Saturday on the Suffolk... read more