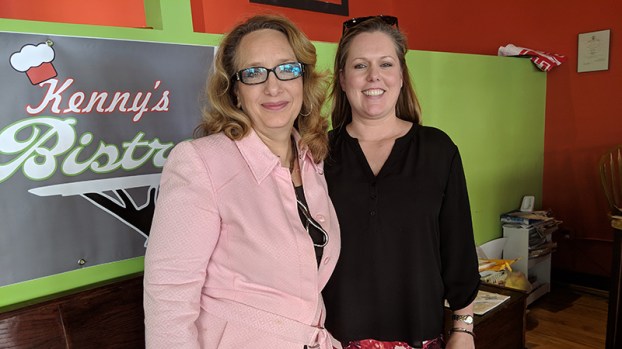 Gina Davis, right, formed Southside Women’s Network last November as a way to help women in South Hampton Roads succeed in business. Karen Hurd, left, said she started the downtown Suffolk chapter of the group to provide area women in business with a support network to help them succeed.

A new downtown Suffolk chapter of the Southside Women’s Network has formed to give area businesswomen an opportunity to support each other and local businesses, according to the group’s founder.

Gina Davis, who has been a small business owner since 2005, formed the Southside Women’s Network last November after trying, unsuccessfully, to get a group on the Peninsula to expand its women’s business networking group. She left that group’s board to form the Southside group.

Davis said her goal in forming the group is to connect female business owners and professionals and help them thrive by increasing their knowledge base, making authentic connections and building their business acumen.

Karen Hurd, a network marketing professional, was looking for a women’s professional group to join and found Davis’ group online. She went to one of its events and after that, she began a downtown Suffolk chapter of the group, which meets twice monthly at Kenny’s Bistro. There are also chapters of the network in North Suffolk, Chesapeake and Norfolk.

Hurd, when she moved to Suffolk from Virginia Beach about two years ago, searched online for a group to join, but didn’t find one until she came across Davis’ site.

The Southside Women’s Network focuses on building relationships instead of being lead-referral driven, the two women said. Davis said the backgrounds of the women in the group run from marketers and entrepreneurs to freelancers, consultants and corporate women.

“This is a growing area,” Hurd said. “This is an underserved area in terms of business.”

Hurd said many businesswomen do not have support networks embedded in what they do and can be more isolated. The group members help each other in building their businesses and hold each other accountable.

“By collaborating with each other, we deepen the relationship (and) we expand the knowledge throughout the group,” Hurd said.

That’s when Hurd and Davis say the lead referrals occur naturally, rather than forcing members to come up with them.

Davis said the Southside Women’s Network, whose social events are open to the public, has seen steady growth since it started last fall.

“All of our events that we have had, people have shown up and are continuing to come,” Davis said.

Davis said she wants to keep the membership fee low — it’s $25 — because for her, it’s about helping Southside women succeed in business.

“I want to focus on growing the network,” Davis said. “It’s not a money-maker for me.”

For Hurd, she wants to spread the word to area women that there is a group that can help them, as women, succeed in business. She also wants to reach out to other female entrepreneurs, especially ones running their business on their own.

“It’s to connect with the entrepreneurs in the downtown, western Suffolk, all the way out to Franklin, Courtland, anybody out this way,” Hurd said.

For more information on Southside Women’s Network, go to southsidewomensnetwork.org.

Kroger to give away reusable bags on Earth Day

In celebration of Earth Day, Kroger will give away reusable bags at each of its 16 Hampton Roads stores. On... read more