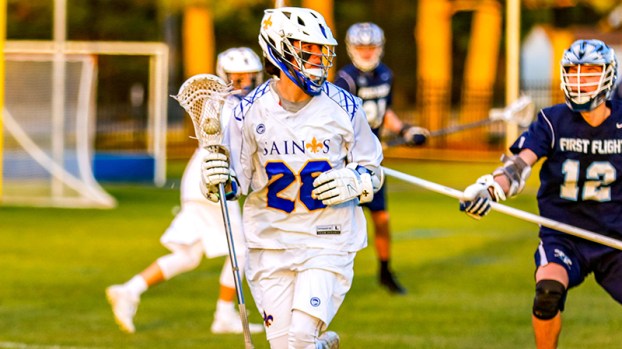 Simon Dowd was voted Suffolk News-Herald Player of the Week after he totaled eight goals and 10 assists in two wins for the Saints. (Submitted Photo)

Dowd steps up for Saints

Simon Dowd was voted Suffolk News-Herald Player of the Week after he totaled eight goals and 10 assists in two wins for the Saints.

After losing some talented players off of a team that reached the state semifinal last season, the Saints were looking for some returners to turn it up a notch. Junior Simon Dowd was one of those players that was going to be looked at to step up, and he has so far.

Last week, the Saints played two games that resulted in wins. In those wins, he had eight goals to go along with 10 assists for the Saints. Dowd felt good about the team’s performances.

“We had a very good week,” he said. “I was able to benefit from the team’s hard work. We felt good about how we competed.”

Dowd feels good about what NSA (7-6) has done so far this season and is excited to see where the team can go. Personally, he has seen the growth in his game this season, for which he has given credit to his teammates and coaches. Because of the talent the team lost, he has had opportunities to step up and has made it happen. Leading up to the season, a big focus of Dowd’s was to make sure NSA had an effective and diverse offense.

His competitive nature motivates him every time he is on the field. Dowd has a drive to always do what he can to help his team win. His inspiration comes from the success his brothers, Eli and Noah, have had in the sport of lacrosse. In particular, Eli had a big senior season for the Saints last year. His assistant coach, Bobby Flintoff, who was once a great lacrosse player, also motivates him.

“These guys have taught me a lot about the game and have helped me improve as a player,” he said. “And with the success my brothers have had in the sport, it has helped motivate me when I am on the field.”

Being a team player is the only thing Dowd is worried about when he is on the field. He hopes he and his teammates can be playing in late June once again. A big goal of his is to play well enough to send his fellow senior teammates off with a season they can remember.

NSA has been ranked within the top five of state polls, and they want to continue to keep getting better as a potential state title contender.

Grassfield too much for Lakeland