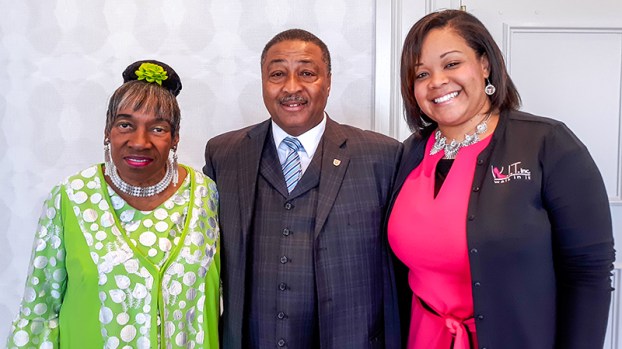 Three people were honored as Community Heroes by the Suffolk Democratic Committee during its annual luncheon on Saturday at the Hilton Garden Inn Suffolk Riverfront.

Each of the honorees was introduced with a list of accomplishments and community service, but the honorees were careful to give honor to God, their family and colleagues and others for their good works.

“It truly is a joy to serve and impact the lives of others, but I certainly do not do this work alone,” said Riddick, the founder and executive director of Walk In It Inc. The organization runs the Ladies of Distinction program in several local school districts, including nearly 700 girls this year in its programs.

“Not only do I have a tremendous staff and volunteer team, but I am grateful for my husband,” Riddick said. Her husband, the Rev. Dr. Dwight Riddick II, is pastor at St. Mark Missionary Baptist Church in Portsmouth.

“It is our joy and privilege to continue to strive toward our mission, and our mission is simply to develop holistically healthy girls and women,” Riddick said. “It is our joy to serve, at this point, close to 700 girls monthly, helping them to develop higher self-esteem and overcome real and perceived obstacles.”

Riddick earned her doctoral degree from Chicago Theological Seminary after graduating from Virginia Union University and the University of Richmond. She’s also part of many other community initiatives.

She is a member of the Suffolk Les Gemmes, a community service organization, and leads the East Suffolk Sophisticated Steppers group.

Wall chose to talk mostly about the line dance group, which her son, Mark Wall, also leads. She encouraged people to come to the classes at the East Suffolk Recreation Center from 11 a.m. to noon on Thursdays and 6 to 7 p.m. Mondays.

Councilman Lue Ward, the final honoree, is in his second term as a city councilman. He is a member of St. Mark’s Missionary Baptist Church and a father and grandfather. He is the founder of Harambee Communications, which publishes Having Church magazine as well as Suffolk Happenings and Hampton Roads Happenings, as well as radio and television shows.

Ward has led hurricane relief expeditions in conjunction with churches and businesses, is a former president of the Nansemond-Suffolk branch of the NAACP, and co-author of “Drawn Out, Sworn In.”

“I want to give God all the praise,” Ward said. “I just do things mostly when the Lord lays on my heart to do them.”

Ward said he is always surprised to hear everything he has done, because “time goes so fast” he doesn’t realize he has done so much.

“It feels good to see some of the things I have done,” he added. “It’s a great honor to be here and be recognized.”

The guest speaker for the event was Joan Turner, the community outreach coordinator for the Commonwealth’s Attorney’s Office. She recalled learning about community service as a young child from her mother, who was a foster parent, volunteered at school when she was a child, was active in their local civic league and more.

These days, Turner volunteers for a number of organizations, including the Suffolk Unit of the Boys and Girls Clubs, which is especially close to her heart.

She said everyone in the room has a vision to make their community better.

“We all have 20/20 vision,” Turner said. “We have a vision to make this community, our churches, our civic leagues and our fraternal organizations bigger and better and take it to new heights. We are all superwomen and supermen in this great city. The vision should be just do it, and do it effectively and in a positive manner.”

Families and friends will join together in a solemn vigil on the evening of May 18 during the lighting of... read more