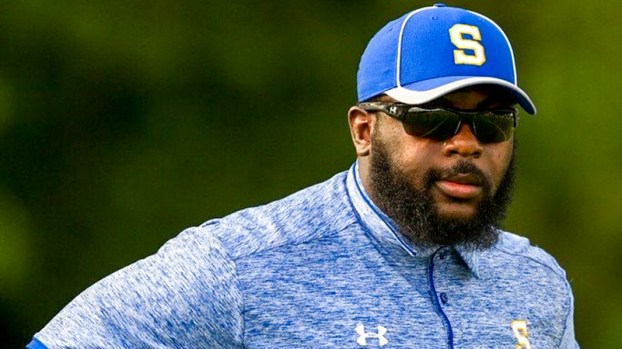 A little over a month after coach Kevin Knight stepped down, Jones, 30, takes over at Lakeland, and is excited about his first stint as a head coach.

“This has been two to three years in the making for me,” Jones said. “I had been making sure I had everything in order so when the time did come for me to pursue these opportunities I’d be ready. I prayed about it, and I’m happy to have this opportunity.”

Jones was originally slated to continue as the defensive coordinator at Oscar Smith, but once the Lakeland job opened up last month, he applied. Athletic Director Gregory Rountree felt good about naming Jones the new coach.

A 2006 Oscar Smith graduate, Jones has seen the national growth of the team as a player and as a coach. He was an All-District linebacker under coach Richard Morgan and then went on to Virginia State to play football there before his career ended after one year due to a shoulder injury. Since 2007, Jones has been on staff at Oscar Smith, which won a state championship in 2011 while making multiple state title appearances. He credits Morgan and the late coach Bill Dee for their guidance for where he is today.

Under Knight, Lakeland went 14-27 but found itself in the regional championship in 2016, its most successful season to date. The Cavaliers advanced to the region semifinals in 2017 before going 2-8 in 2018. Jones was a part of the rise to prominence at Oscar Smith and hopes to bring that to Lakeland.

“I’ve been a part of the building process as a player and coach, so I’ve seen both sides,” he said. “So, the main thing is just going out and putting in work. Making sure you put your head down and block out the noise. We want to make sure we are building the right culture and making sure these young men be the best they can be on and off the field. If we do the little things right, we’ll be at a place where we’ll get to see the success.”

Jones is still filling out his staff at this time and is excited to get to work immediately with his new team.