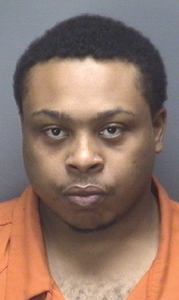 A third person has been arrested in connection to an April 27 shooting, Suffolk Police said Wednesday.

Davontae Jamera Garvin, 26, of Windsor was arrested Tuesday and charged with aggravated malicious wounding, felonious assault, discharge of a firearm in a public place, use or display of a firearm in commission of a felony and conspiracy to commit a felony, according to a news release.

Javonte Kaeshan Rountree, 22, and Diondre Ramon Baker, 19, both of Suffolk, were arrested May 2 in connection to the April 27 incident, in which Emergency Communications received a report of gunshots around 11:37 p.m. and two minutes later, Suffolk Police and Suffolk Fire and Rescue responded to a single-vehicle accident at Portsmouth Boulevard and Suburban Drive.

The driver of the vehicle was found with a gunshot wound, as well as injuries he suffered in the accident, according to a news release, while another person who was shot received medical treatment at a local hospital for non-life threatening injuries.

Garvin is being held at the Western Tidewater Regional Jail, according to Suffolk Police.

Suffolk Police say the investigation into the incident is ongoing.

A 14-year-old boy was shot late Monday night on Smith Street and was treated for a non-life threatening injury, according... read more