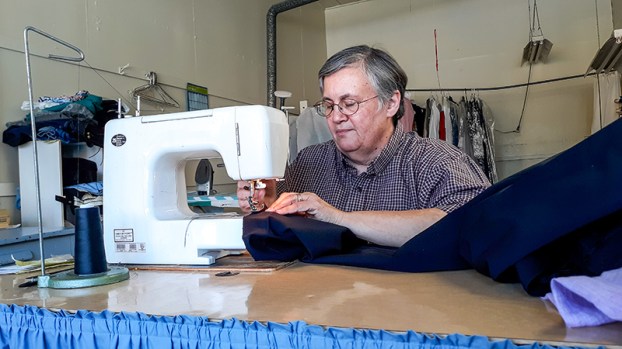 Cynthia DeWitt works on a job at her West Washington Street shop. She plans to close the business in June after running it since 1995.

Lucille’s to close up shop

After 45 years in business, Lucille’s will be closing up shop this summer.

Lucille Judkins started the downtown alterations shop in April 1974. She ran it until 1995, when Cynthia DeWitt took over.

DeWitt said she loves her customers and her business, but her daughter made an offer she couldn’t refuse — the opportunity to move to Maryland to live with her and her two grandchildren, who are 11 years old and almost 2 years old.

“I will miss my customers, and I will miss the business,” she said. “I will miss that Suffolk’s downtown is building back up again. It’s nice to see things happening here again. I’ve seen a lot of changes.”

DeWitt learned to sew at age 10, when her older sister wanted to earn her sewing badge for Girl Scouts. Her mother said she didn’t have the patience to teach it twice, so she made sure both girls learned at the same time.

DeWitt has been sewing ever since. She worked at several local shops, including working for Lucille for two years before taking over. At the time, there were five people working there including Lucille.

DeWitt used to take in curtains and upholstery, but she had to stop doing that when she had her knees replaced and couldn’t get down on the floor anymore.

She’s had some unusual jobs. She once had a customer who had pajamas for her horses, and she altered them several times. She also once altered military uniforms for the gunnery crew on an aircraft carrier, who wanted to play a joke on their commanding officer. The front of the uniform looked like it was supposed to, while the backs of the jackets were blazing red.

Her favorite time of year is prom season.

“The girls are so excited, and it’s fun working with them,” she said.

She has had some customers through every stage of life, altering their prom and pageant gowns, gowns for sorority functions, bridesmaid gowns, wedding gowns and finally maternity clothes. She has changed bridesmaids’ gowns to different-looking prom dresses and once altered a debutante gown to a prom gown in two weeks.

“I have very loyal customers,” she said.

But DeWitt’s husband, David, died of a heart attack last fall, and the 100-mile round-trip drive to downtown Suffolk from her home is taking a toll.

“My kids and I, too, worry as far out as I am, something might happen,” she said.

She plans to stop taking new work by Memorial Day, and June 28 will be the last day for customers to pick up their clothing. Throughout July she’ll be cleaning out the shop.

DeWitt said she looks forward to spending more time with her family and might think about doing alterations in someone else’s shop in Maryland.