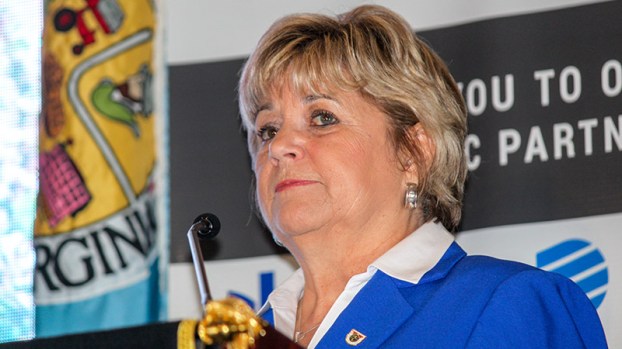 Suffolk Mayor Linda Johnson gave the State of the City address Tuesday at the Hilton Garden Inn-Suffolk Riverfront. The theme of her address was “Come Grow with Us.”

‘Come grow with us’

Before a packed ballroom at the Hilton Garden Inn Suffolk Riverfront Tuesday for her State of the City address, Mayor Linda T. Johnson said Suffolk is thriving and continues to see positive growth.

Touting numerous accomplishments over the last year, Johnson said the city has “a remarkable success story to share as people and businesses alike have made the decision to come grow with us.”

She cited steady population growth since 2012, and noted that, according to the University of Virginia’s Weldon Cooper Center for Public Service, the city is the only one in Hampton Roads projected to grow 10 percent or more in each decade between 2000 and 2040.

The city, she said, has seen the largest percentage increase in home sales, with growth of 8.6 percent over the previous year. It is also ranked in the top 10 in Virginia in affordable housing, she said.

She pointed out that, in 2018, the city had more than $83 million in private capital investment, which helped create 1,395 new jobs.

There have also been new developments at Obici Place, she said, with it being two-thirds complete after sitting vacant for a decade. She noted that the city and Cinema Café are still in negotiations to bring the movie theater to the site. In March, the city’s Economic Development Authority and the company entered into a sales agreement to build a new theater, restaurant and bar.

There have also been developments, she said, with new businesses and residential areas in North Suffolk, as well as a food and beverage processing cluster that is flourishing.

“Our schools are indeed leading the way for our youth,” Johnson said.

In health care, Johnson praised a number of developments, including Sentara BelleHarbour’s growing North Suffolk campus after it completed a $33.5 million expansion, Bon Secours’ new $77 million hospital in North Suffolk to be operational in the next two years, and Sentara Obici’s expanded campus.

She also cited the Obici Healthcare Foundation, which she noted has awarded more than $48.6 million since 2006 to organizations to respond to medical needs of the poor and uninsured.

“Nowhere is the commitment to the community of our public safety professionals more evident than in our National Night Out celebrations, or what we refer to as our going away parties for crime,” Johnson said.

In downtown, she said there is an “ongoing renaissance” for its commercial core, and the city is working to support business growth and provide entertainment options. The city is also in the design process for the Festival Events venue and Market Hall, with the Library Square — the city’s new library to replace the Morgan Memorial Library — as the anchor of a new active public space on West Washington Street.

“That much anticipated public space, along with a mixed-use residential historic rehabilitation, will stimulate new activity in the eastern half of downtown to include the Phoenix Bank block.”

Through SPARC — Suffolk’s Premier Art, Retail and Cultural Initiative — Johnson said the arts are sparking a new creative vibe downtown. And if you get hungry or thirsty, new establishments in the food and beverage scene are bringing “a fusion of cultures.”

“The energy of entrepreneurs is palpable downtown,” Johnson said.

Closer to home, Johnson said $16.1 million in funding from the Virginia Department of Transportation will provide a long-term, permanent solution to ongoing traffic and train conflict at the Nansemond Parkway/Wilroy Road intersection with the building of a new overpass.

The city has also completed plans to renovate the former U.S. Army Reserve Center that it obtained through a land exchange and turn it into the Bennett’s Creek Recreation Center. She also noted that Lone Star Lakes Park will be enhanced with more trails, road improvements and will have an interpretive community center and meeting facility, and Lake Meade Park will soon debut a new inclusive playground, with another such playground in the works in North Suffolk.

Johnson said a water access study, as part of the Parks and Recreation Department’s master plan, is under way to determine additional ways people can enjoy the water. One of the items in the study includes the possibility of adding deep water boat access and potentially developing water access for paddle craft and fishing at the 380-acre former Driver Naval Transmitter site.

“It’s evident that when it comes to opportunities to enjoy leisure and culture within our community, we truly offer something for everyone,” Johnson said.

But with all the positive developments, the mayor said, it’s the people of the city that make it special and will allow it to grow stronger in the year ahead.

“Make no mistake,” Johnson said. “We have something extremely special in Suffolk — so special that more and more people are deciding to call this city home.”

Relaying to remember, Relaying against cancer

Hundreds of friends, family members and survivors gathered at the Nansemond River High School track on Saturday to walk during... read more