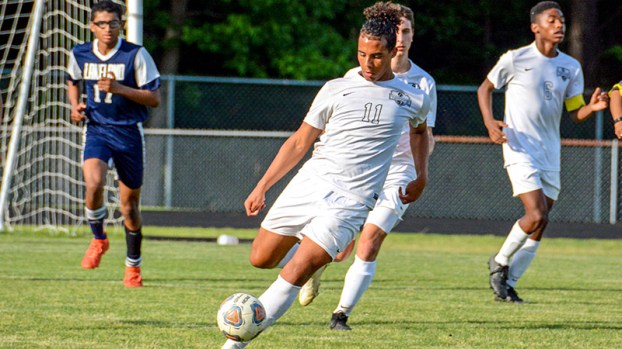 Justin Borggren gets the ball up the field for the Warriors. The Warriors will take on Kecoughtan High School at Powhatan Field for the opening round of the region tournament. (Melissa Glover Photo)

The Nansemond River High School and Kecoughtan High School boys’ soccer teams will meet in the first round of Class 5 Region A state tournament.

Both Warriors team will clash in the first round of region play Thursday evening. Nansemond River comes into the tournament with the No. 5 seed with a 12-2-2 record on the season. With the momentum the Warriors have, it’s possible they can have a run like they had during the 2017 season.

During that season, the Warriors became the first boys’ soccer team in Suffolk to reach the state tournament. They came within a goal of making the Class 5 state title game that season.

Both Nansemond River and Kecoughtan will be facing off Thursday evening at Powhatan Field at Old Dominion University at 7 p.m.

The King’s Fork High School boys’ tennis team saw its season come to an end in the quarterfinals of the... read more