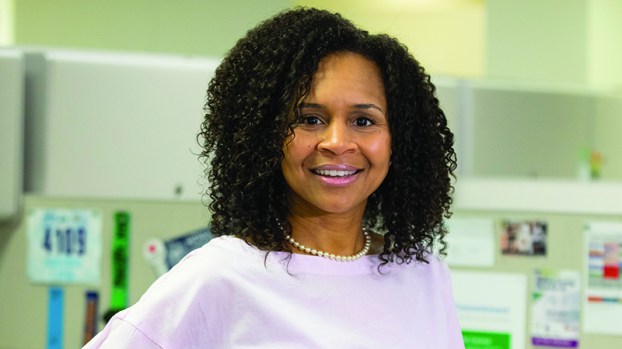 A Suffolk woman recently was one of six Dominion Energy employees recognized with the annual Benjamin J. Lambert III Volunteer of the Year awards.

Tonya Denise Byrd and five others each got the opportunity to direct a $5,000 donation to their charities of choice.

“It was a really humbling experience,” said Byrd, who added that volunteering is a focus both of her family and of Dominion. “We make volunteering a part of everything that we do.”

The program was named in honor of Lambert in 2014 in recognition of his decades of service to his community as a member of the Virginia General Assembly and a member of the Dominion Energy Board of Directors.

Byrd started at Dominion as an intern when she was in high school and has been with the company ever since.

“One of the things I really like about Dominion Energy is they really encourage us to volunteer, not only during personal time but also during work,” she said.

Byrd was nominated for the award in the community vitality category by coworkers Bonita Billingsley Harris and Celestine Moore.

Byrd volunteers in a number of ways both connected to the company and outside of it.

She participates with the African American Resource Group, one of several employee resource groups the company has for employees from underrepresented groups. She was the community focus chair and now is the vice chair.

The group hosted 35 students from Lakeland High School for a youth leadership conference last year. The group also has a lunch and reading buddy program at Jacox Elementary School in Norfolk. Employees go once a month to eat lunch with first-graders and read to them.

“We felt that was a good opportunity to reach out to students early and work with them,” Byrd said. “You want to make it fun, so we eat lunch with them as well.”

The group also hosts an annual community block party, which is open to the public, at Chesapeake’s Oscar Smith Middle School. The employees talk about internships, apprenticeships and scholarships, show young people what Dominion employees do and give out prizes to students.

Outside of Dominion, Byrd also worked in 2018 to bring the United Negro College Fund Mayor’s Masked Ball to the Hampton Roads area. The organization raises millions of dollars for students who can’t afford to go to school.

“The inaugural event was in March of 2018, and I was on the inaugural planning committee for that,” she said. She’s also the co-chair for the 2020 event.

Byrd is also a member of Alpha Kappa Alpha sorority’s Lambda Omega chapter in Newport News and does a number of projects through the sorority. She has mentored students, volunteered at soup kitchens, collected bookbags and more.

She decided to direct her $5,000 donation for the Dominion award to a scholarship fund at Howard University, where she graduated. She and the other women she pledged with created the endowed scholarship fund this year in honor of their 20th anniversary.

Byrd said it’s important to her to participate in community service. As a young woman, she was a member of Upward Bound, which mentored her and other first-generation college students.

“There were so many people who helped me get to where I am today,” she said. “I know I could not have done that all by myself. I would not be here if it wasn’t for the help of all the people I met along my way. We are obligated to pay it forward, because you never know people’s situations.”

She said she and her husband, Stenette Byrd III, impress upon their 11-year-old twins, Trae and Stenette IV, the importance of community service.

“I just want them to understand we have so much more than so many other people,” she said. “It’s part of being a good human to provide support. It doesn’t have to be money. If you don’t have money, give time.”

Boys and girls moved non-stop as the sun went down over downtown Suffolk on Friday evening. Each one of them... read more