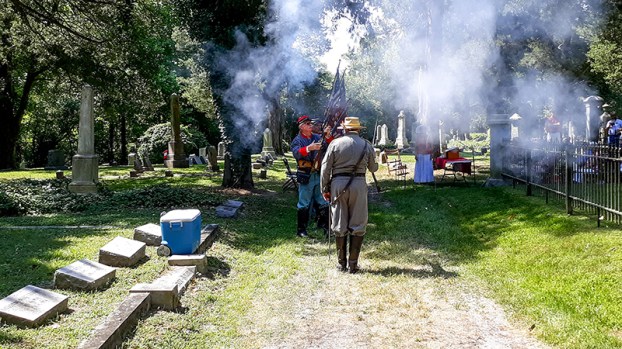 A rifle salute by the Dismal Swamp Rangers is conducted during Saturday’s United Daughters of the Confederacy ceremony.

The Suffolk Chapter 173 of the United Daughters of the Confederacy recognized Memorial Day and commemorated the placement of 90 new shields on Confederate graves in Cedar Hill Cemetery on Saturday.

Those who died in the U.S. Civil War, both Confederate and Union, were the first to be recognized on what became known as Decoration Day and then Memorial Day. The commemoration started in the late 1860s and took on additional significance with each new conflict. In 1968, Congress designated Memorial Day as the last Monday in May and declared it a federal holiday.

Saturday’s ceremony took place beside the Confederate memorial in Cedar Hill Cemetery, erected by the Tom Smith Camp 1702 of the Sons of Confederate Veterans. Several speakers referenced ongoing efforts to take down Confederate memorials elsewhere and said they feel it’s their duty to defend their heritage.

During the ceremony, the names of 90 Confederate soldiers buried in Cedar Hill were read aloud. Their graves have been decorated with new shields in a project started by the late Betty Hart prior to her death in February 2018. Many donations made in her memory helped fund the project.

Virginia Division Vice President Susan Carraway said the project will continue as more shields are able to be purchased. At least 160 graves in Cedar Hill, potentially more than 200, remain to be decorated with the shields.

“These men, they fought to defend their property, their homes and their family,” Carraway said. “They did what they felt like they had to do. They had an invader.”

Virginia Division President Ginger Stephens said the ceremony is “important, because we need to remember our history and our heritage as Americans. We all have a shared piece of the history.”

Editor’s Note: This is the first in the Suffolk News-Herald’s annual series of stories on the valedictorians at Suffolk’s five... read more