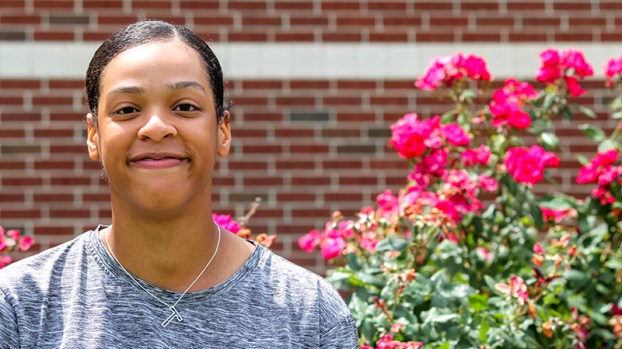 Trinity McRae, 18, is the valedictorian of Lakeland High School. She plans to attend Emory University in Atlanta, Georgia and is thinking of double-majoring in biology and chemistry. She said her mother, Angela McRae, who died of cancer when Trinity was just 13, has been a big inspiration in her life.

Trinity McRae admits that she was in a dark place after her mother died while she was in middle school.

Her mother, Angela McRae, died from cancer when Trinity was just 13, and, coupled with a move from suburban Birmingham, Ala., to Suffolk, Trinity felt out of place and wanted to be alone.

She had no desire for friends.

But by the time Trinity McRae finished seventh and eighth grade at John Yeates Middle School and got to Lakeland, someone else wanted to be friends with her, even though McRae admits that she was mean to her. But the girl was persistent, and didn’t give up until McRae finally gave in.

That person, Starlina Shepard, broke through, and the two are now best friends.

“When I got to Lakeland, I was kind of closed off, but I carried that from middle school because I was still grieving in my own way,” McRae said. “I tried to make myself really unapproachable, wearing all dark colors. She’s like the total opposite of me. She listened to pop music and wore these bright, neon shirts, and she wouldn’t leave me alone. She saw that I was trying to distance myself, and she brought me in to our group.”

McRae believes she was looking for her all along.

“I guess it was sort of ironic, because she’s a star, so she kind of did bring the light back into my life,” McRae said.

She also poured herself into her academics, something her mother stressed to her growing up, taking a series of Advanced Placement classes including biology, chemistry, European history and calculus.

Her emphasis on academics paid off, as Trinity will be Lakeland’s valedictorian.

“My mother, she really placed an emphasis on homework and doing well in school,” McRae said. “So when she passed away, doing well in school just helped me feel closer to her. It didn’t matter how busy she was or what she had going on. She always found time to help me with my homework. She wanted me to do well in school, so I felt that was the best way to honor her. I didn’t know I was going to come this far.”

As she prepares her valedictorian speech, McRae said it hasn’t hit her yet that she’ll be graduating soon, though she said the White Coat Ceremony for the Biomedical Sciences Program was as emotional as she expects her school graduation to be.

“I think it’s probably not going to hit me until I’ve packed my first box or like, I’m actually standing on stage at graduation looking at everyone,” McRae said.

She still feels like she has a long way to go, but when things get a little stressful, she knows she can unwind with her favorite reading material, comic books, with DC Comics — in particular, Batman — among her favorites.

McRae plans to attend Emory University in Atlanta, Ga., and is thinking about double-majoring in biology and chemistry. Her original plan was to be a pediatric oncologist, but she thinks she wants to work more in a lab setting doing cancer research.

“I don’t want any other kids to go through what I went through, so the ultimate goal is to find the cure for cancer,” McRae said.

In her speech, she plans to talk about her mother, though it was a topic she initially resisted.

“I didn’t want to broach this topic, but my teacher, she urged me to,” McRae said. “I talk about my mother. She was a big part — I wouldn’t be on that stage if it wasn’t for what she instilled in me, and I just discuss, basically, how I feel her at Lakeland. I feel her presence.

“I didn’t want to bring up something that was dark, but my teacher, we were discussing other students who also wouldn’t have parents there. She was like, a lot of the time, they get left out in speeches. She was just saying that you would be speaking for them.”