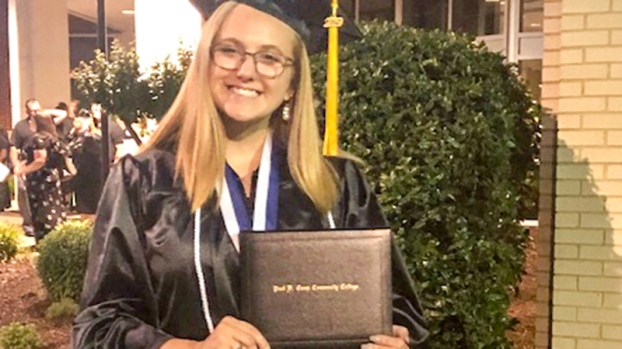 Haley Adams will graduate from Suffolk Christian Academy this Saturday with a special distinction: she is the first student of the school to graduate with a certificate from Paul D. Camp Community College prior to graduating high school.

She did it through the Dual Enrollment program and became the first SCA Knight to get a certificate from PDCCC prior to her high school graduation, Headmaster Tamra VanDorn said. Although other SCA students have taken some Dual Enrollment courses for at least the last four years, Adams is the first to go all the way through earning a certificate.

Adams said she feels well prepared for the future thanks to the experience.

Adams was first inspired to do the Dual Enrollment program after her cousin did it while in high school, she said.

Adams juggled multiple responsibilities while in high school, as well. In addition to her high school and college coursework, she played tennis, did paid work part-time at her school, was involved in Beta Club and was president of the Student Government Association.

Adams said her favorite Dual Enrollment class was her computer class, because unlike other classes that were online, she got to be in the classroom.

“It was just being able to interact with college students and hear what they were going through,” she said. “To experience and kind of know how to handle those situations because I’m learning from them was definitely helpful.”

Adams is thankful that Suffolk Christian gave her this opportunity and hopes it helps other students who come behind her.

“They were very open with it. I hopefully opened some doors so the students behind me will be able to have this opportunity as well,” she said. “It was a difficult process, but in the end, it was very worth doing.”

VanDorn said she is proud of Adams’ accomplishment and also hopes future students avail themselves of the opportunity.

“Some of the courses she took for that (PDCCC) completion were not courses she needed for her high school completion,” VanDorn said. “She did above and beyond what was required of her. It’s been a good partnership with the community college, and it’s a visible way to show that partnership can work to our students’ advantage.”

Adams’ parents, Dean and Leslie Adams, said they too are excited about their daughter’s accomplishment.

After her high school graduation, Adams will enter Averett University as a sophomore and hopes to eventually pursue a law degree and work in family law. She’s also been invited to the Bonner Leadership Program at Averett, where she’ll work with a nonprofit organization in Danville during her time there, and has a plan for how to get plugged in to her faith while at college, as well.

“I have a heart for helping others,” she said. “That’s always been my idea of what I wanted to do. Working with families and trying to help them get through the bad times would definitely be something I want to do.”

‘Living for Others’ with every mile

Danny Chung biked into Suffolk Wednesday on the third day of a 1,400-plus mile trek. The 23-year-old Fairfax native is... read more