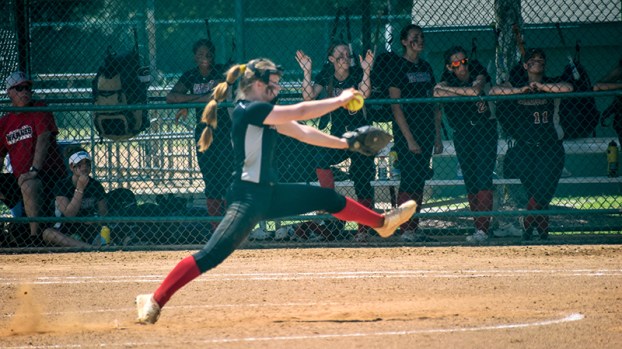 Taylor Cherry was one of six Lady Warriors to make the All-District softball team. Coach Gabe Rogers also got co-coach of the year honors.

Eight Suffolk players were selected to both of the Southeastern District teams and a coach of the year honor.

Suffolk had a strong season in terms of softball, with Nansemond River, Lakeland and King’s Fork each making the region tournament this season. There was a lot of strong individual play in the district by Suffolk players, which was evident by the number of All-District selections.

Nansemond River led the way with six selections, as Taylor Cherry and Shelby Knaak headlined the first-team, with Cherry being one of three pitchers to make first-team and Knaak making it as an outfielder. Er’ron Burton, Toni Jones, Misty Even and Hayley Duckett were all second-team selections. Coach Gabe Rogers earned co-coach of the year honors with Kirk Clayton of Great Bridge.

“It’s great to be recognized for your hard work,” Cherry said. “I give a lot of credit to my parents, coaches for pushing me throughout the season. It’s great to see the team get rewarded as well and for coach Gabe to get recognized. He works tirelessly to excel in every aspect of the game.”

The Lady Warriors had a strong season within the district, finishing among the top teams in earning a No. 3 seed in the region. Four of Nansemond River’s six All-District selections will be returning next season.

Lakeland had one selection with Lisa Stuprich making the first-team at outfield. King’s Fork also had a single selection in Cali Hinnant as a second-team pitcher.