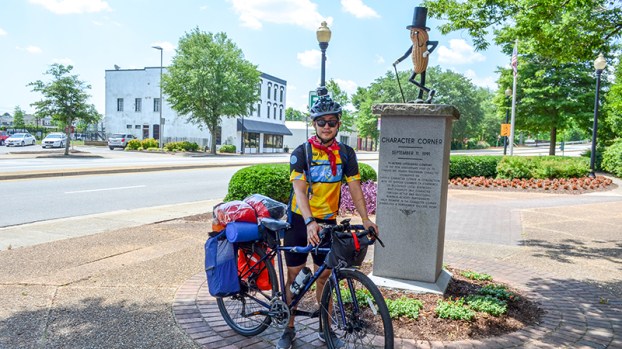 Danny Chung, 23, biked into Suffolk on Wednesday as part of his roundtrip charity ride for the Suicide Awareness Voices of Education nonprofit organization.

‘Living for Others’ with every mile

Danny Chung biked into Suffolk Wednesday on the third day of a 1,400-plus mile trek.

The 23-year-old Fairfax native is facing the ups-and-downs of country backroads and city streets on his bicycle for “Living for Others,” a fundraising and awareness campaign for the Suicide Awareness Voices of Education organization, or SAVE.

Chung is taking a scenic route from Washington, D.C. to Myrtle Beach, S.C. and back again. He said that the first 100-or-so miles were surprisingly hilly and that the heat over the past few days has been intense.

“I’ve actually had to refill this hydration pack two or three times over the course of a day,” he said beside the statue of Mr. Peanut in downtown Suffolk. “This thing holds two-and-a-half liters, so it’s a lot of water.”

He said that he wanted to use Wednesday as his recovery day and planned to stop by local spots like The Plaid Turnip restaurant on North Main Street. Part of the fun of his journey has been learning more about each city he’s been through, like Smithfield’s ham and Suffolk’s peanuts.

“It’s been really interesting discovering the stories behind these places,” he said.

“It’s just been really refreshing when I needed help or I needed water, someone was almost always there to help me out,” Chung said. “It was kind of really refreshing to see the altruism behind that, and (to) meet a lot of new people as well and spread awareness.”

Chung organized his “Living for Others” to raise money for SAVE and to do his part to spread awareness during Mental Health Awareness Month this May.  The mission of SAVE is “to prevent suicide through public awareness and education, reduce stigma and serve as a resource to those touched by suicide,” according to save.org.

SAVE was one of the nation’s first organizations dedicated to the prevention of suicide, a crisis that affected Chung personally. Several of his friends and classmates over the years have died by suicide, he said, and he wanted to do his part to make a difference.

“I never got over the grief of that and I felt like I needed to do something now, (because) I wasn’t able to do something then to actually make a change and (make) an impact (on) the situation at hand,” he said.

Visit save.donordrive.com/campaign/Living-For-Others to make a donation, with 100 percent of the proceeds going to SAVE. Go to instagram.com/others_canlive/ for photos of Chung’s journey.