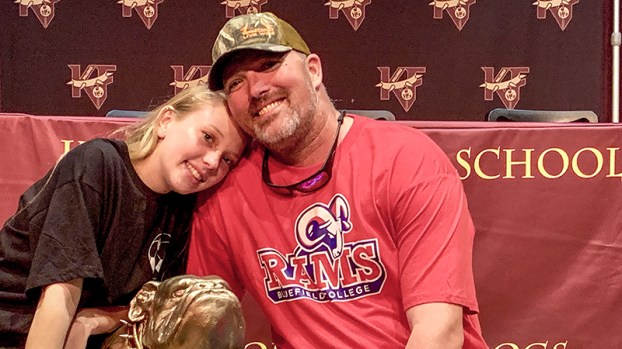 Lonni Cox along with her father Ryan Cox after her signing ceremony. The King’s Fork senior will play college soccer at Bluefield College. (submitted photo)

After leading the Lady Bulldogs in goals scored the past two seasons, Cox signed her National Letter of Intent Wednesday Playing in college has been a dream she has had since she was a kid.

After speaking with coaches and looking at other schools, including Mary Baldwin University, she said she felt most comfortable at Bluefield.

“They see that I’ll be a big asset to the team,” Cox said. “They look forward to see what I can do to help the team in the fall.”

Cox, who scored 17 goals, felt good about her senior campaign and earned a second-team All-District selection.

“This season was definitely great,” she said. “Even though we didn’t get to go as far as we would have liked I was able to play my last season with my girls.”

At Bluefield, she plans to major in exercise and science.

After winning a state championship, the Nansemond-Suffolk Academy boys lacrosse team had a strong showing on the Virginia Independent Schools... read more