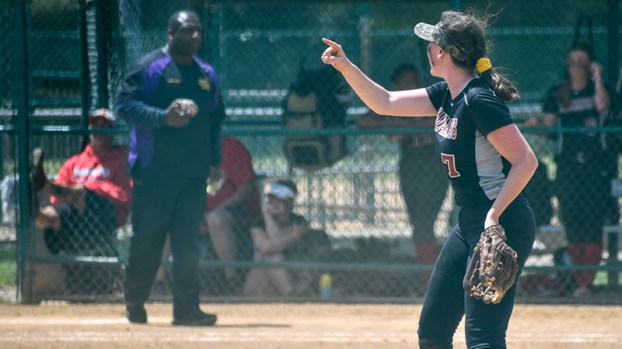 Megan Wilson and Hayley Duckett will both play softball at the University of Virginia’s College at Wise.

Duckett, Wilson to play at Wise

Nansemond River High School softball standouts Hayley Duckett and Megan Wilson will continue their careers at the next level together.

After a strong season for the Lady Warriors, both Duckett and Wilson will head to the next level together to play softball. Both have spent the last four years playing together for Nansemond River and have plans to play another four together at the University of Virginia’s College at Wise.

Wilson returned to the field as a senior and had a strong season for the Lady Warriors. Last year, she was dealing with ankle injuries that made it hard for her to compete and essentially missed her junior season. However, after her junior year, she spoke with coaches at U.Va.-Wise and told them it was a possibility that she’d commit even though at that time they had not seen her play.

“I visited the campus to meet the girls, and it instantly felt like home,” Wilson said. “I was welcomed in every way possible, and I loved it.”

Wilson felt good about how her senior campaign went for the Lady Warriors. Nansemond River was a game away from reaching the state tournament. Wilson was an honorable mention in the district and a second team All-Region selection.

Duckett said her recruiting process was a bit difficult, because she wanted to make sure she found the right school. It was important to her to have a nice balance between academics and athletics, and U.Va.-Wise as a school and program provided that for her.

“I am in love with the coaching staff, and overall, the school is a family environment,” Duckett said. “I know nothing is set in stone on the field, so I know I’ll have to come in and work.”

For her senior season, Duckett finished as an All-District and All-Region selection.

Duckett and Bailey are close friends, and with U.Va.-Wise being eight hours away from Suffolk, they are glad they are going together. They will be roommates in the fall.

“Over the last four years we have grown closer, especially after we both committed to play at the same school,” Wilson said. “We are best friends and we get along really well. These next four years with her will be exciting on and off the field. We are excited about what’s ahead.”

“Megan and I have gotten so close,” Duckett said. “So, to be able to start this new chapter in our lives is amazing. I am grateful to have a familiar face in a new environment.”

With both the Nansemond-Suffolk Academy softball and boys’ lacrosse teams winning state titles, Addy and Jackson Greene had the experience... read more