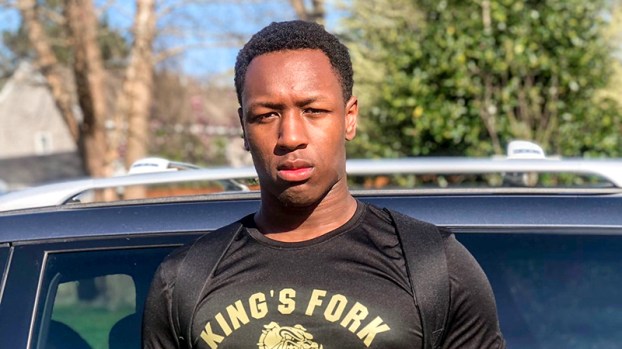 DeVaughn Orr has picked up offers from NCAA Division I schools and is picking up interest from other schools as well. (submitted photo)

The offseason has been a strong one for rising King’s Fork High School senior DeVaughn Orr in terms of interest and scholarship offers he is pulling in.

This summer, he will be preparing for his senior season with an abundance of eyes on him from some top programs in the region. To this point in his recruiting process, Orr has already pulled in two offers from NCAA Division I schools in Coastal Carolina University and Hampton University, and has also been on a visit to East Carolina University.

“The process has been extremely interesting so far,” Orr said. “I have enjoyed it to this point. I’ve learned a lot, which has motivated me to want to perform at a higher level next year.”

Last season, Orr was an anchor on the Bulldogs’ offensive line, earning All-Region honors. The schools that have been in contact with him so far and who have offered scholarships see him sticking on the offensive line at the next level.

“Most of the schools I’ve talked to like my flexibility with positions,” he said. “They see I can grow as a player.”

Orr comes from a family of athletes. His father played football at ECU, and his mom ran track and played volleyball in high school. Also, his twin sister currently cheerleads for King’s Fork. Through the whole process so far, he has had his family next to him along the way and has stressed being patient throughout the process.

There was a never a time Orr felt like the interest from schools wasn’t going to eventually pick up for him. He knew if he continued to work hard and let his play on the field do the talking, good things were going to start happening for him.

“I just stayed humble and focused on school and played my heart out every time I stepped on the field,” Orr said. “I trusted the coaching staff to handle the rest.”

The last few seasons, Orr played under Coach Scottie Littles, who has since moved on to a new gig in Florida. With Coach Kermit Buggs at the helm now for the Bulldogs, Orr is looking forward to a strong summer and fall.

“Me along with my teammates and the senior class are definitely looking forward to the energy and talent this year is bringing,” he said. “We felt like we have become a closer, more disciplined unit, and we have had seniors step up as leaders.”

As of now, Orr has no plans to commit to a school before or during the season. He has his sights set on January, which is when his 18th birthday will be, to make his decision on his future.